Well, my second half marathon is done. It seemed like it took FOREVER to arrive, since I registered so far in advance and my first half marathon was in March. I wish I had done another one in between, but I had a weird ankle injury and couldn’t run the Wine Country Half I was registered for in April, then I got married in June and wedding planning took over my life. The SB race was great, and very special since I grew up here in SB and my family still lives here and they got to see me at the finish line.

I felt really strong the morning of the race, and was feeling pretty confident that I was going to beat my PR of 2:15 that I got in March. I ended up running at 2:04, but I definitely hit a wall for the first time ever. Looking back, I think my problems were that I didn’t do enough speed work, I tapered too much,  I over-carbloaded, and I pushed myself too hard the mile before the huge hill at mile 10. I was so worried about having tired legs the day of the race that I didn’t do much the entire week before (except bootcamp on Monday), and I carbloaded for an entire two days, which I didn’t do for the last half. 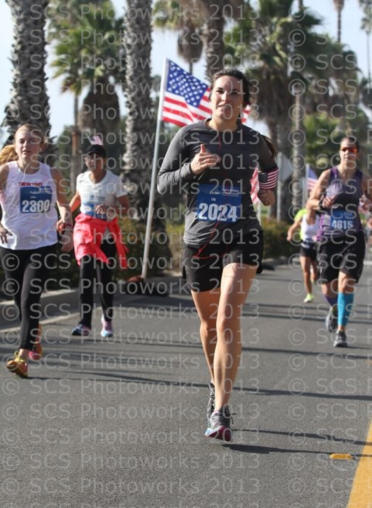 After I crossed the start line, the first mile marker came so incredibly fast, I thought it might have been a mistake. It was encouraging though, and I was hoping that the whole race would feel like that. After that it kind of just went downhill (metaphorically, not literally, unfortunately). I didn’t start to feel good until about mile 8 when there started to be more spectators and I’m so familiar with the roads here that I knew exactly how the rest of the course was going to be. I knew it would be flat until the mile 10 hill, and during this time I was thinking back to my other half and thinking afterward how I should have pushed myself more. So this is what I did, but I’m pretty sure I expended all my energy during those miles. I got to the bottom of the hill pretty tired, but continued to push strongly about half-way up the half-mile hill. That’s when the wall hit, and I really struggled the rest of the time. I saw a few people from bootcamp during that time which occasionally gave me little pushes, but other than that, I pretty much felt like a hundred-pound weight was on my body and I had no energy left to give. During the final stretch, I really slowed down, but it was the best mile of the race by far; it was Veterans Day weekend so there were flags everywhere, and volunteers were handing out small flags to carry to the finish line. I kept trying to pick it up, but it was tough. My husband and mom were near the SB City College track where the finish line was, but I missed them since I didn’t know where they would be. When I actually got to the track, I had to run almost a full lap before finishing, and when I was about .25 away from the finish, I saw my friend’s sister coming up behind me, and for some reason I felt a huge surge of energy and knew I could sprint to the finish. I was determined to smile across the finish line, and I sort of accomplished that, looking at the pictures. I felt so worn out after the race, I was really turned off of running for about a day, but I knew it wouldn’t last long. I also heard from a few people how hard this race was for them, maybe because of the strong head winds the whole time, particularly at the big hill.

I sort of managed a smile crossing the finish line. One day I’m going to perfect the arms up finish line pose that everyone seems to have down.

I’m currently just doing bootcamp every day during the week, but am planning on doing a longer run this Saturday. 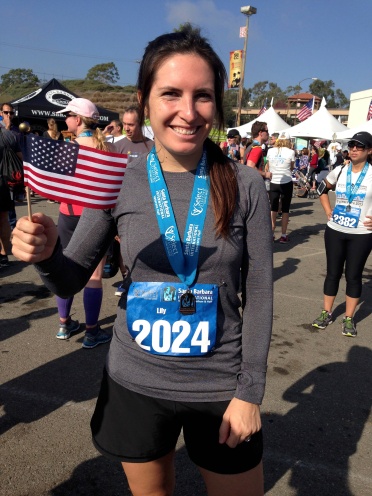 My next half marathon is scheduled for March (San Diego Half Marathon, where it all again), but Jeremy and I are now hoping to be in Europe by then, so I’m thinking about signing up for the Mermaid Series Half Marathon in February, since my grandma lives in San Diego and I really want to run another one there since she loved seeing me so much last year.

For the next race, I really want to get more mileage logged in general, and definitely some speed work. Today in bootcamp we did a timed mile and I got 8:08. We’re going to time ourselves every day for the next five weeks, and I’m really excited to see how much  I progress in that time.