Happy May! I’m really excited that it’s May because we are meeting up my parents this month! After living across the country from them in Georgia for years and then moving back to Santa Barbara, I got used to seeing them all the time. I am really missing them, and can’t wait to spend time in Europe together. Not to mention go out to some delicious dinners.

This delightfully awkward picture of me and my parents in a hole was taken in 2009 at the Normandy beaches.

When our time in Avignon came to an end, we said goodbye to our apartment and got back on the train to head to Narbonne. It was quite an eventful two hours; we got to see the Mediterranean Sea, fields of poppies, and this couple next to us got into a passionate fight and the woman ended up hitting the man in the head and storming off. It was a little awkward for us, but we pretended to not be staring at them and watching intently.

Continuing our tradition of wine drinking on train rides. We didn’t spill any this time!

I loved seeing the ocean so much.

Our housesitting hosts picked us up at the train station and brought us to their house in Azille. It is a tiny wine village surrounded by vineyards, but once a year it hosts a big feria where hundreds of people swarm the town for five days and things get a little crazy. There is a stage set up in the village square with dancers and DJs at night (that would last until the early hours of the morning), and food vendors offer duck and steak and paella and crepes, and other things (our hosts offered to buy me a “chip sandwich” since I don’t eat meat – literally French fries and mayonnaise in a bun. I declined). There are bull runs and horse parades as well. There is an outdoor bar where you can get a big cup of red wine for one euro, and a PITCHER of wine for five euros. Glorious.

Our British hosts took us to get wine from the wine bar next door on our first night and introduced us to the owners, and everybody else inside the bar, all of whom were speaking English. This village is so small that everybody knows each other pretty much, well, all the British people do at least. We then headed over to the festivities and they bought us dinner: fresh paella that a guy was making in a huge pan. It was delicious, and felt so good to eat a hearty dinner with some seafood.

(I gave my chicken to Jeremy.)

It was hard to sleep at night while the feria was going on because the music from the DJ was shaking the walls of the house until at least 2am. People like to get pretty crazy at night apparently, and Saturday we were up super late, because a group of drunk guys decided to hang out right under our bedroom window and proceed to destroy a truck that was parked there (luckily our host’s car was parked down the road to avoid the madness of the feria).

Pretty much every day we have been heading over to the festivities and watching some sort of dancing or music, eating Nutella crepes, and walking around town. 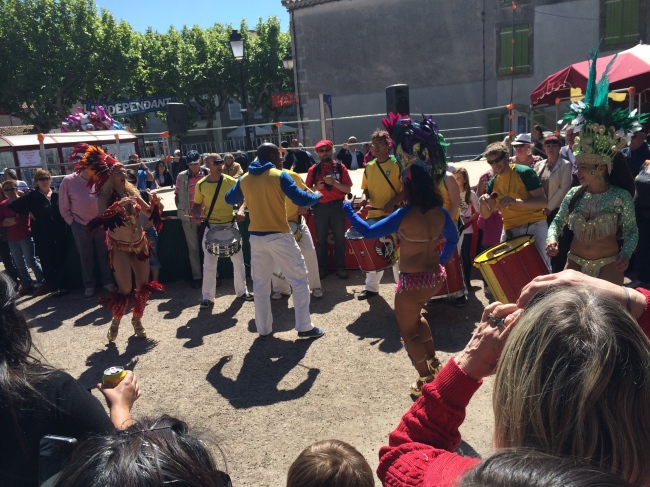 Brazilian dancers at the feria. 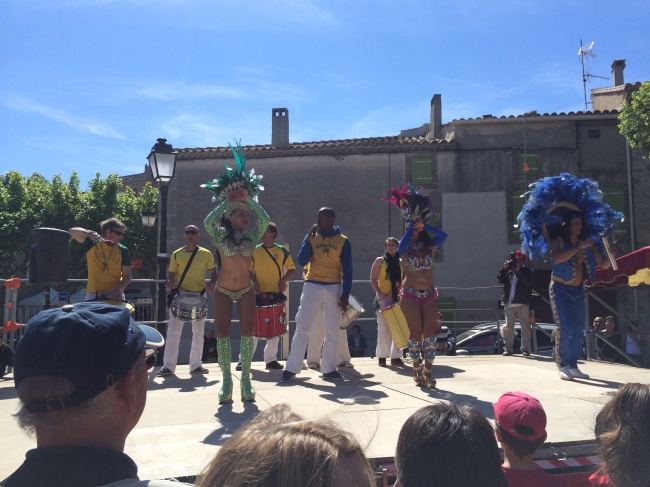 Jeremy feeling a little feria’d out. 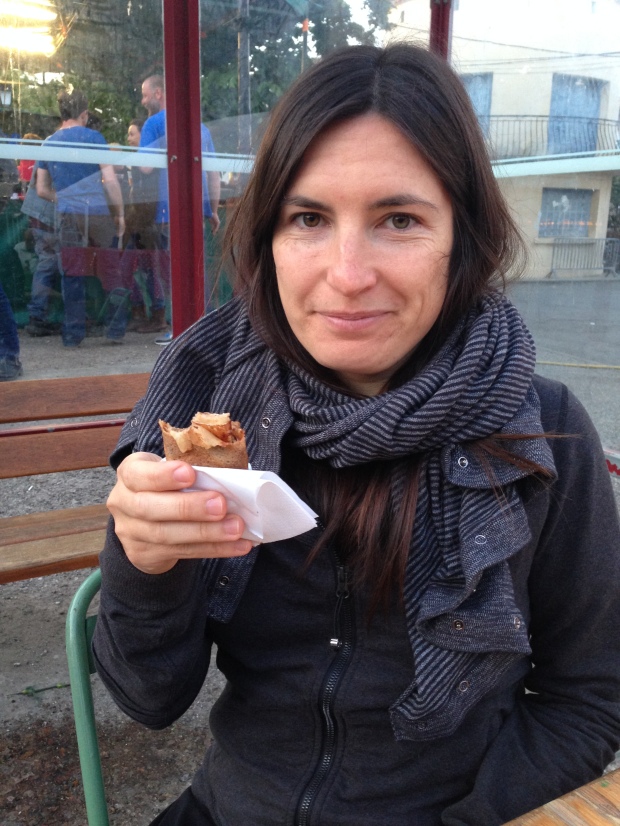 Friday night we really got into the spirit of things, and danced to a polka/ska band playing on the stage. There was a photographer that took a picture of us dancing, and I am on a mission to find it on the internet somewhere. I did make it on the official feria website from when we were watching the Brazilian dancers, so I’m pretty much famous around here now.

I’m over near the left side of the photo… if only I knew how to draw a circle on a picture.

I’m pretty glad the feria is over now, honestly, because we can get a good night’s sleep and see how the village functions normally.

Since I’m from Southern California, I’m used to celebrating Cinco de Mayo, so I had my own little celebration yesterday by taking a dip in the indoor pool and laying out with a glass of white wine (even though it felt kind of wrong to celebrate Cinco de Mayo in France… after all, it’s a day to commemorate the Mexican army defeating the French army in the Battle of Puebla).

My set up, with Lily the mastiff accompanying me.

I’m hoping to get my courage up to take the manual car out again, and head to Narbonne for its market on Thursday. We also want to take a trip to Carcassonne before we leave. I really want to feel a bit more comfortable driving that car before taking it to a town 40 minutes away!