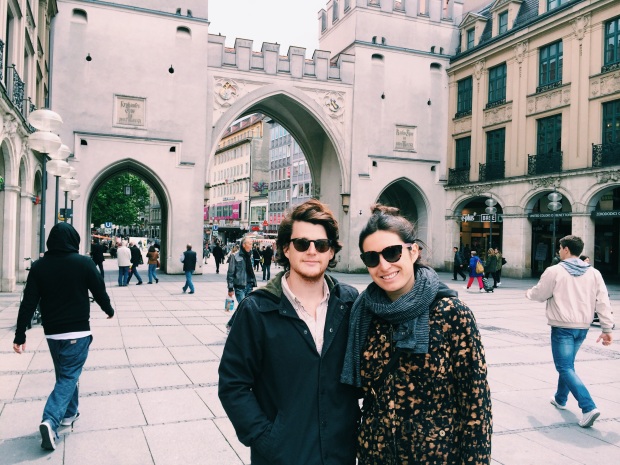 What a great city. It was the first time in Munich for all of us (me, Jeremy, and my parents), and nobody was quite sure what to expect. Jeremy and I are housesitting in Bavaria, and luckily my parents decided to drive us since they didn’t have any other plans. We left Honfleur around noon, and knew we had a long day of driving ahead of us. I was the navigator, and relied on a map that looked like this (we didn’t go through Frankfurt, but it was a good representation of the German map I was relying on):

Is this a cruel joke, Germany?

Good thing I had some chocolate for navigation energy (essential on a long road trip).

We finally rolled into the city around 10pm and arrived at mine and Jeremy’s Airbnb (a few blocks away from my parents’ hotel), where this was waiting for us:

I normally don’t drink much beer and usually stick to red wine in California and of course in France, but WHOA the beer in Germany is SO GOOD. I haven’t had wine since we left France, and every beer I’ve had here has been more delicious than the next.

The day after we arrived it was Jeremy’s birthday (28 on the 28th!), and we started the day by finding some breakfast. Our apartment was just a couple blocks from the train station, and we were both craving a BIG cup of coffee (which we hadn’t had since we left America, really). Munich definitely has a more American feel when it comes to restaurants and coffee shops, and we found some really good coffee in large to-go cups. Ah, the comforts of home. The train station has a very impressive selection of restaurants on every level, and each one looked really good, but when we walked by a Mexican place serving breakfast burritos, we knew we had found the perfect birthday breakfast. I know it seems weird to eat Mexican food in Germany, but we could see the burritos and the ingredients and the tortillas looked good. And how can you mess up a tortilla stuffed with cheese and eggs? It turned out to be a good decision, and the burritos were delicious (they even had guacamole and really good salsa inside). 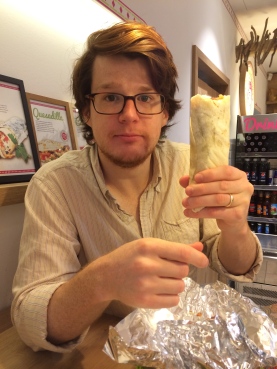 After breakfast, we walked all over the city, and marveled at the impressive architecture that seemed to surprise us at every turn.

My mom and her new friend. 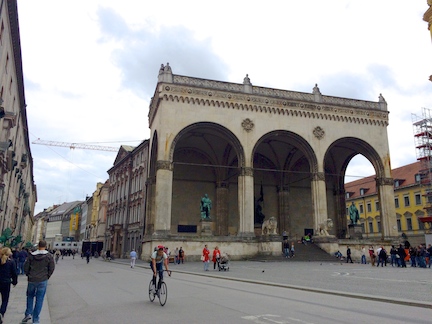 Does this not remind you of “It’s a Small World”? I had it stuck in my head while we were walking around, and then an oompah band played it at a beer hall (or what sounded like it at least…), so I guess it’s not just me.

I’ll never get over how cute these little vehicles are. 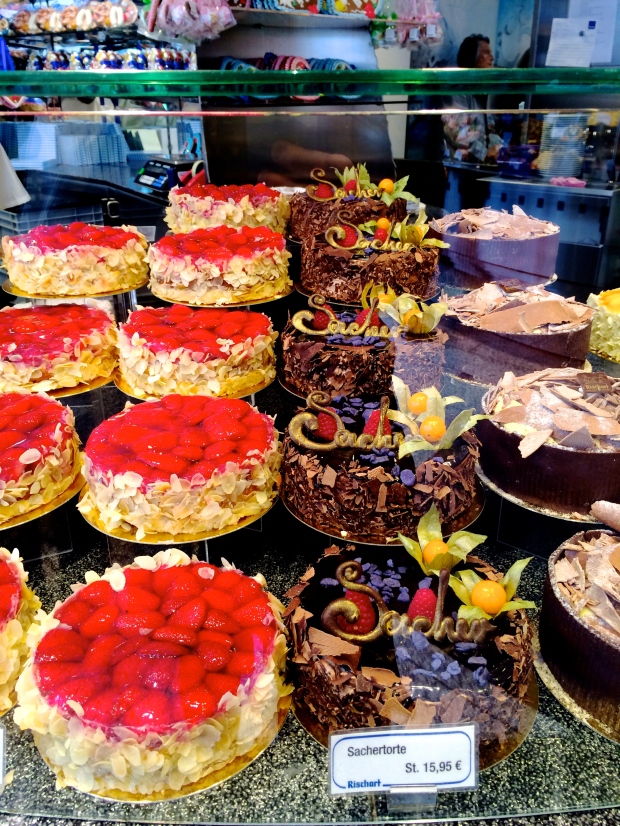 I thought we escaped the tempting treats when we left France. Oh, how wrong I was.

Guess Munich knew he was coming.

For dinner, we went to Hofbräuhaus, the most well-known beer hall in Munich. It’s kind of a requirement for every visitor to go at least once, so we knew it was going to be crowded. Luckily, it holds thousands of people, and the efficiency of service is down to a science. We sat ourselves, and didn’t have to wait long to get served liters of beer and traditional German food. With the oompah band playing and everybody drinking and talking and occasionally singing along, it is pretty much impossible to not have a good time at a beer hall. 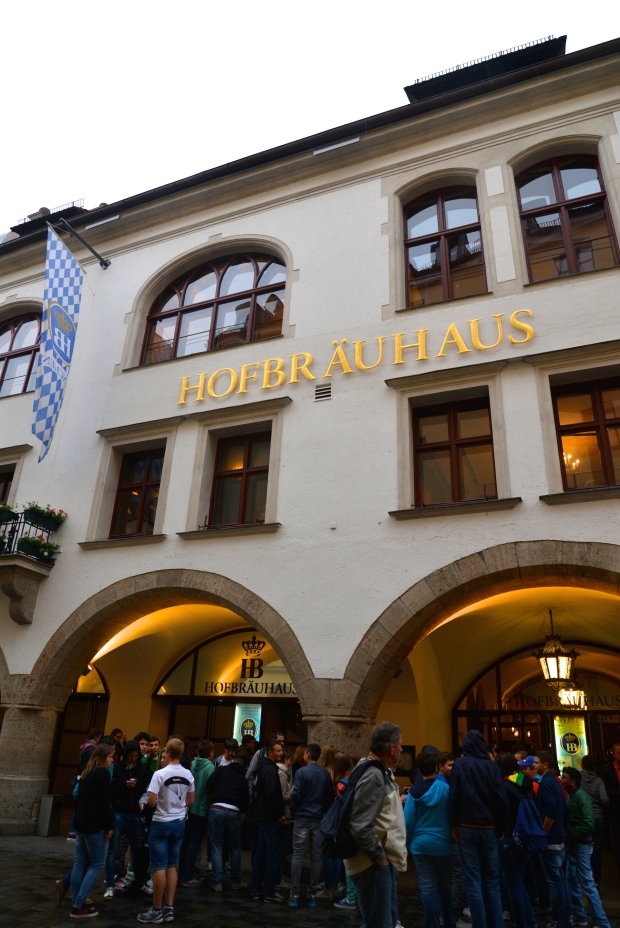 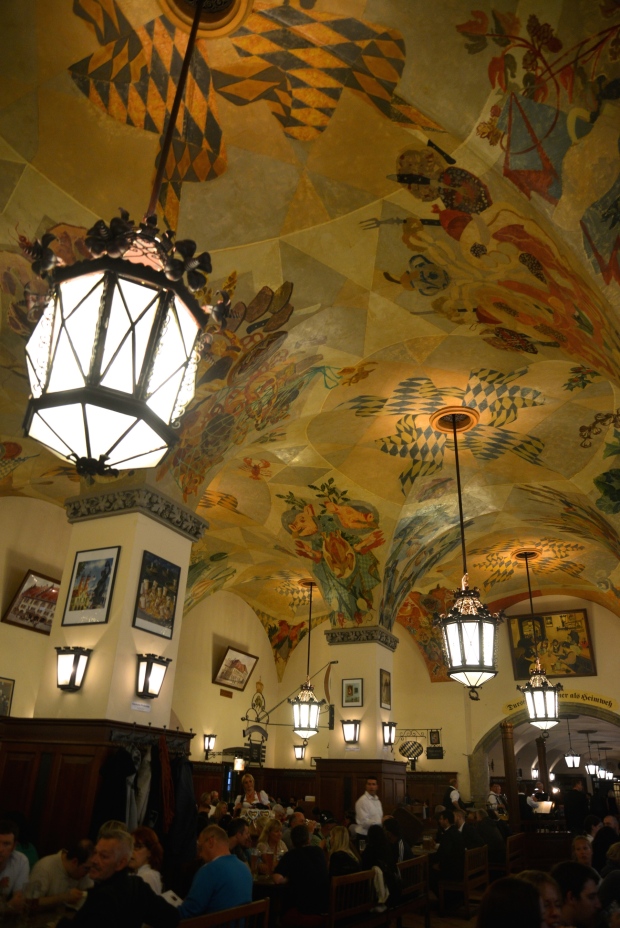 My Spätzle with fried onions on top, my mom’s Wiener Schnitzel in the background. And lots of bread in between. 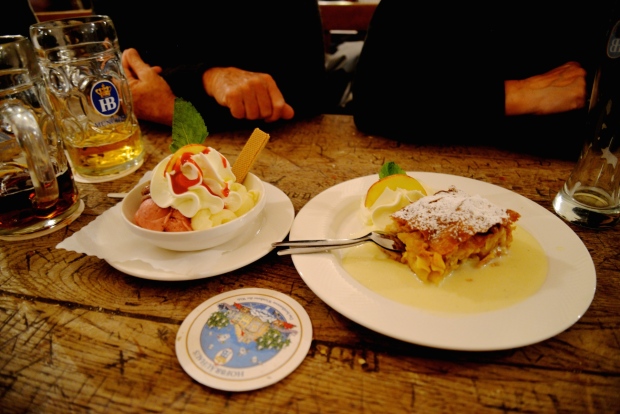 We waddled our stuffed selves back to our respective accommodations, and I took some pictures along the way. 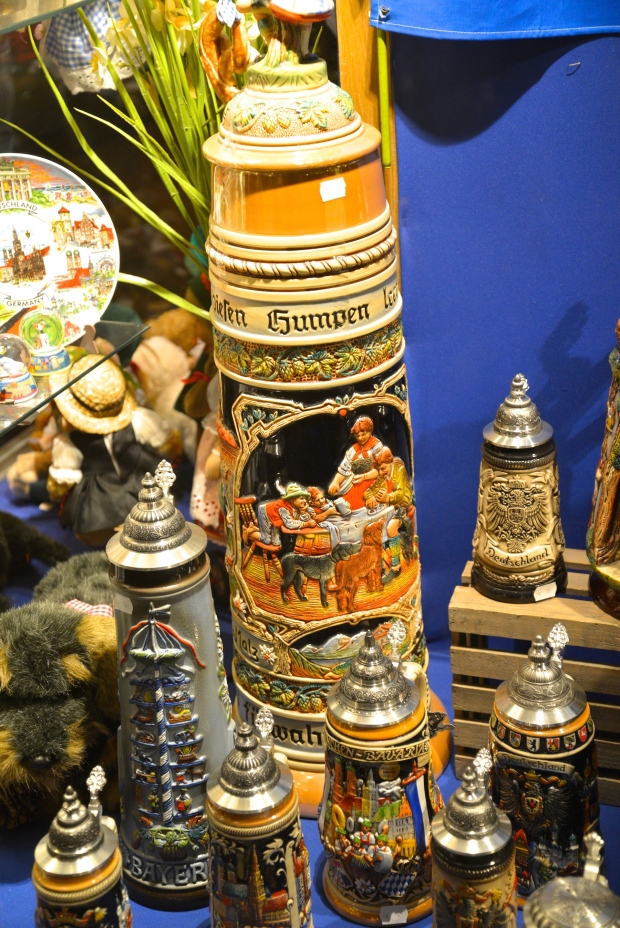 We will own one of these someday. 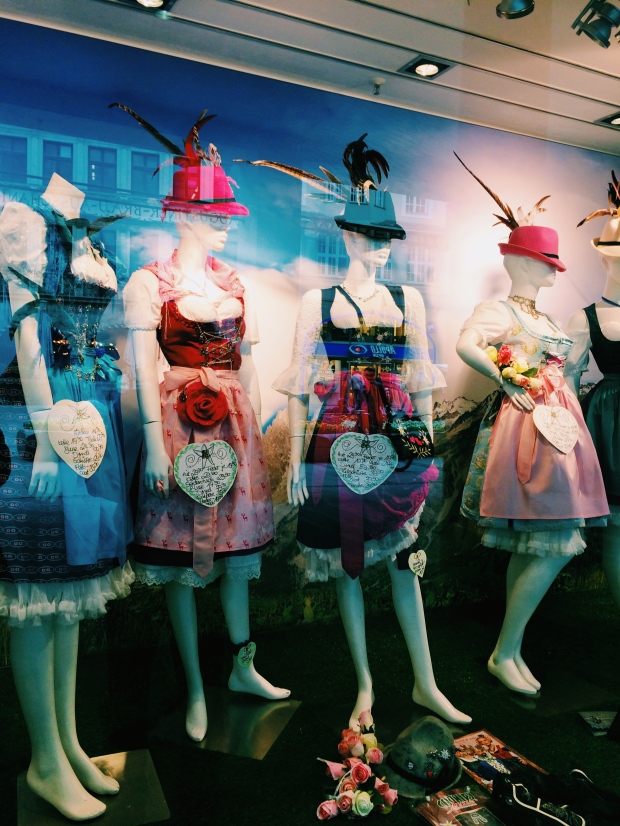 The next time you see me, I might be wearing one of these.

The next couple days were filled with a drive south on the Romantic Road to visit the Neuschwanstein Castle (more on that later), and more eating, walking around, and beer drinking. 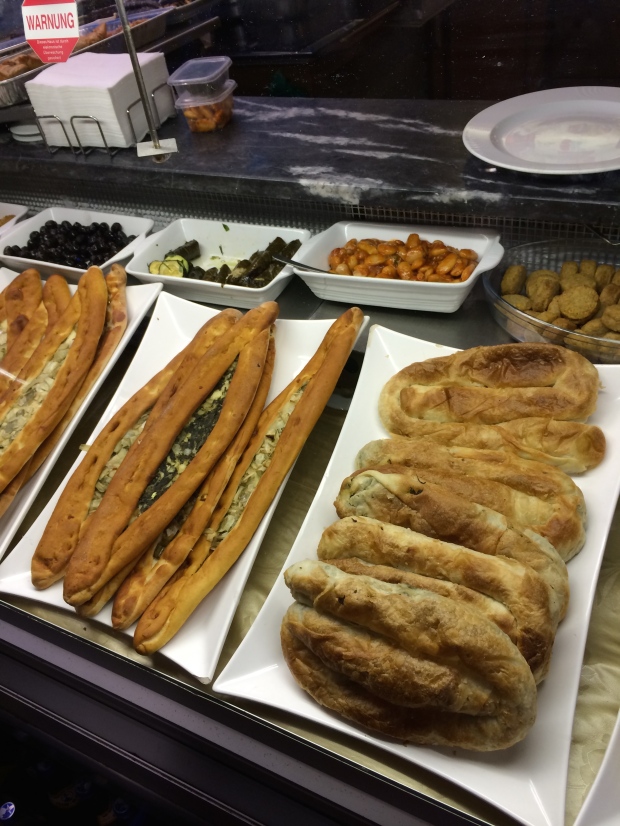 We found a place near our apartment called Veggie Döner and oh my god it was delicious. The seitan (basically vegetarian ‘meat’ made out of wheat gluten) was cooked on a spit like regular kebab meat, and shaved off and put in a tortilla with lots of other good stuff. And there were other Turkish goodies that looked really tasty also. 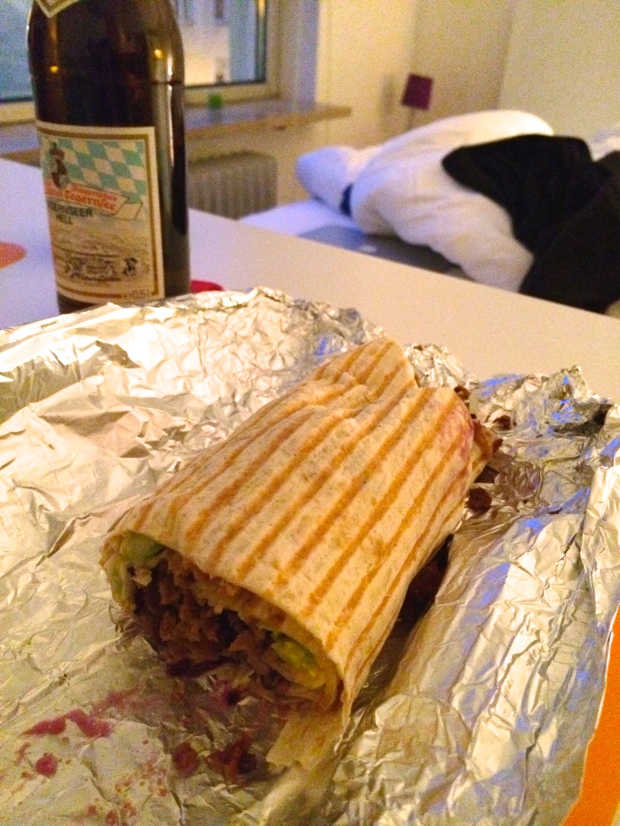 I want another one.

Visiting the Chinesischer Turm biergarten in the English Garden with a pretzel bigger than my head (and that’s saying a lot because I have a huge head). 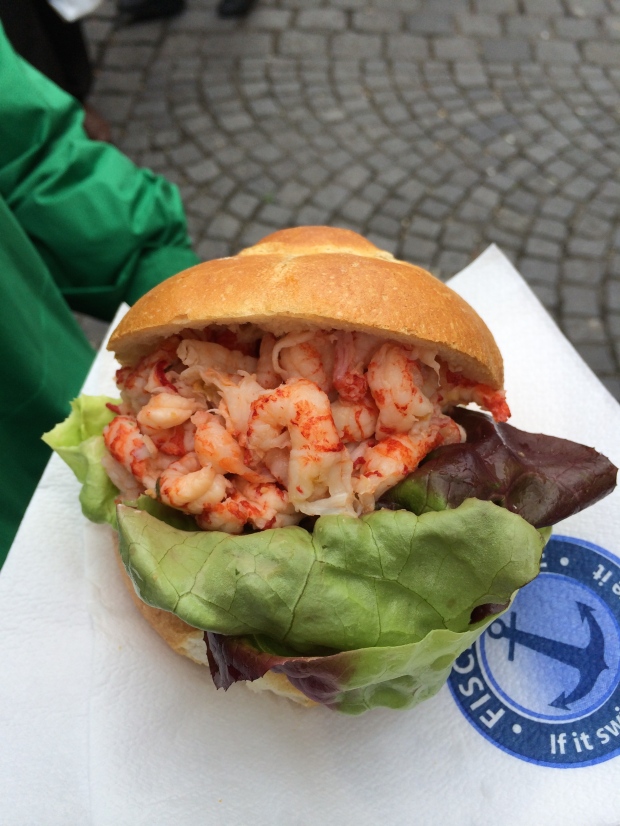 A fresh seafood sandwich from one of the many restaurants in the impressive Viktualienmarkt, a food market that is open every day in the center of Munich.

The Englischer Garten (English Garden) is beautiful and massive (bigger than Central Park) and starts in the city center. I wanted to run here, but didn’t make it. One day!

We stumbled across a puppet show in the underground mall we also found accidentally. Germany is pretty cool.

Like I said, we really really loved Munich, and are now enjoying the beauty of the Bavarian countryside in the house we’re looking after. Happy June!