Before Jeremy and I left for Europe, I decided I wanted to run my first full marathon abroad while my parents were visiting, and chose the Cork City Marathon in June. It was not a fully thought through decision, and no one had even planned transportation to get to Ireland. Shortly after, our plans fell through and we all decided to go to Italy instead. For about two weeks, I thought I was starting marathon training. In that time, I realized that training for my first full marathon while traveling would be really hard, and not all that realistic. So, technically I’ve been registered for a marathon before. But this time, it’s for real. 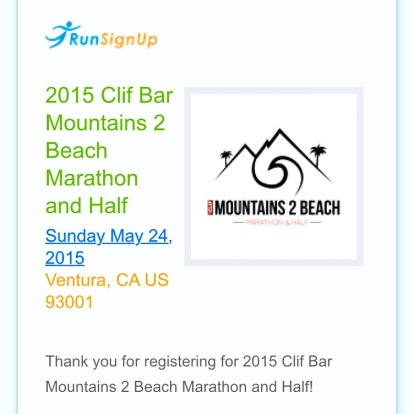 A few days ago, I registered for the Mountains 2 Beach Marathon on May 24th. I’d been wanting the Oakland Running Festival Marathon in March to be my first full for a while, but it just seemed too soon and I didn’t really feel comfortable with it. I researched different marathons for weeks, and finally decided on this one. The course starts downtown Ojai, and ends along the ocean in Ventura. It’s close to Santa Barbara so my parents can come, and it’s a holiday weekend so I’ll have an extra day to recover. It’s a pretty small field, but I’m hoping that won’t affect me too much. My next marathon will have to be a big one with lots of crowds to see the difference. I’m working on building a base to start training in January, and I’m pretty excited. The Ojai mountains are beautiful, and it should be a really nice course. It’s also touted as “lightning fast” because of the downhill elevation, but I doubt I’ll be running anywhere near lightning speeds.

I was worried about too much downhill at first, but I read every review of the race I could find and the consensus was that it’s a gentle slope and you hardly notice.

In the meantime, I have the Santa Barbara Half Marathon on Saturday, which I’m not really prepared for. I feel like I’ve said that for my last couple halfs, and I hate it! But with traveling and moving and all that, I’ve been trying to get back into a good running groove. I ran ten miles last weekend, and I did two out-and-backs from the house we’re staying in currently. I thought it might be boring to do this, but it actually made it go by faster because I could think about it in 2.5-mile increments. I also listened to the Serial podcast, which made it go by super fast. I highly recommend it if you want something to get hooked on.

Found some leftover Halloween candy on the ground. I didn’t eat it.

Tried these for the first time. It’s kind of fun eating jellybeans while running, although they stuck to the inside of my shorts pocket because of how sweaty I was… gross.

The Wednesday before Halloween, November Project was having a Not-So-Casual Wednesday workout, and I wore a dress shirt and tie. It got hot really fast.

The only time I dressed up this year for Halloween. I felt like a server at Olive Garden.

The whole gang. I love being at the Hollywood Bowl for sunrise!

Walking around and looking at the neighborhood’s Halloween decorations.

In other news, I’ve had a horrible stiff neck this week, and it’s been really painful especially at night. 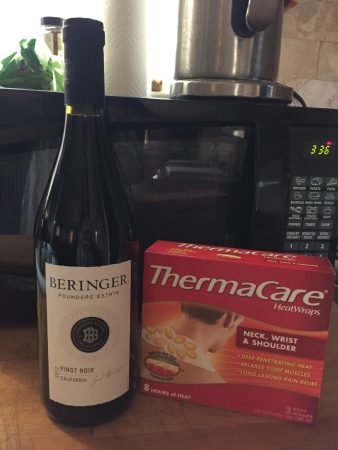 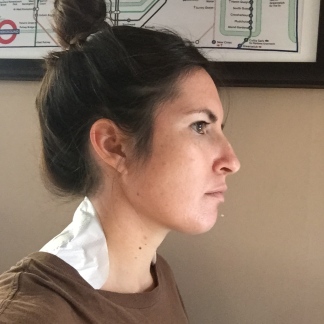 These feel nice and warm, but didn’t seem to do much in the way of relieving pain.

My mom visited me here in LA and we went to lunch at Petit Trois – SO GOOD.

There’s only counter seating, which I love.

Ham and butter sandwich for me, Croque Monsieur for my mom.

Jeremy and I visited the nearby Golden Road Brewery, and had some nice lunchtime drinks and food.

It rained one day last week! It never rains here (hence the terrible drought) so it was great. And caused a fire-like sunset.

That’s about it… Jeremy and I are heading up to Santa Barbara this morning to spend a couple days there before the race on Saturday. Hopefully I’m able to finish the race and not crash and burn at mile 7… wish me luck!