I’m kind of at a loss and not sure what to do. My left knee is confusing me. About a month ago when it started hurting after a particularly jump-y, hard bootcamp class, any pain subsided within a few days of rest and I ran my half marathon a couple weekends ago pain-free. I honestly haven’t done much in the way of running since then (almost two weeks) except a couple shorter runs and one long run last weekend. It’s not that the pain is severe and causing me to limp, and it’s not always there. It occasionally hurts when I stand up if I’ve been sitting for a long time, or randomly throughout the day. I’d say 60% of the time there’s no pain. But it’s that 40% that has me pretty worried. I tried to think about things that have changed over the last month or two that could have caused this, and over Christmas there was a month-and-a-half-long period of time where I didn’t do any strength training. But after almost a year of strength training, I don’t think that too much muscle would be lost just in that time. I’ve given myself plenty of rest, I eat very healthy, I recover properly. I don’t eat meat (except seafood), but I make sure to get enough protein. I had blood tests last year and they came out stellar. This is why I’m confused. I’ve gained a little weight since I got married in June (about 6 pounds) and maybe that has something to do with it, but it’s not a huge amount. Maybe the muscles in my quads/glutes aren’t as strong as they should be and there was too much pressure on my knees. Maybe my form wasn’t perfect when I was doing all those jumping/burpee exercises over and over in bootcamp. Or maybe I’m just overthinking it.

I have the San Diego Half Marathon on March 9, that I really want to run. We have already gotten a hotel room downtown SD and my mom is going to drive down to watch me race. It’s still two and a half weeks away, and even after resting a week, I should still be able to do it. I’ll play it by ear, but I’m remaining hopeful.

I’m also supposed to be training for a damn marathon. These weeks are base-building weeks in my training plan and since I have a pretty good base built up, I hope it’ll be fine, but the more I don’t run, the more I know I shouldn’t push it and try to run my first full marathon (that my entire family has planned a trip to Ireland around… ugh).

Sometimes I honestly feel like crawling in a corner and crying; it’s just so frustrating to work hard and see yourself improving, only to have a setback. It’s okay though, I’m trying to stay positive and work on strengthening my leg muscles and glutes, ice, foam roll, stretch, etc.

My knee was feeling okay yesterday morning so I went out and tested out three slow miles. Sometimes I would feel the pain, sometimes I wouldn’t. Around mile two it pretty much went away completely. I did some stadium stairs at the local city college, with no pain going up, but with pain going down the stairs.

Not a bad place to do stadium stairs.

I finally got a hair cut! I hadn’t cut it in a year, and it was definitely time. My hair stylist cut off a little more than I was expecting, but I’m so happy with it. All in all, there’s about 7-8 inches gone. It is thrilling to know that I can wear a tank top to run and not have the hair from my ponytail get caught in the FRONT of my armpits.

I also had a pretty exciting mail day the other day: 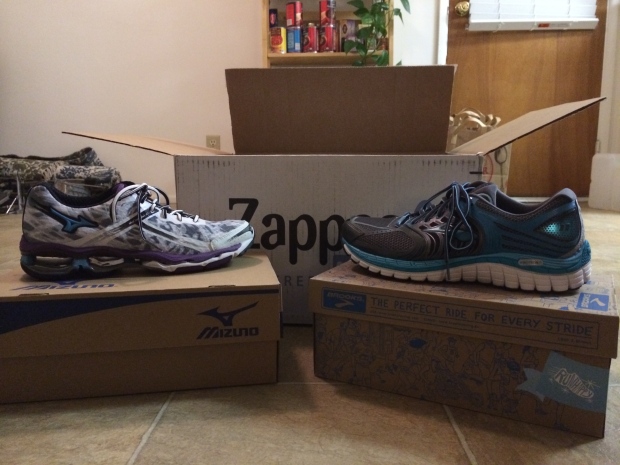 I ordered the Mizuno Wave Creation 15 and the Brooks Glycerin 11 to see which ones I liked better. Well, I tried on the Glycerin in size 10 at the local running store and they were too small so I ordered them in size 10.5, which is waaay too big. I had this problem with the Brooks Adrenalines in the past, which is unfortunate because I hear Brooks shoes are great. I wore the Mizunos yesterday and I really liked them. They fit perfectly, they are light, it’s a bonus they are cool-looking, and I am happy with them. I need to test them out more (whenever my knee feels better) to really get a feel for them, but I was happy after yesterday’s trial. Like I said in an earlier post, I’ve been told to get stability shoes for pronation the last few times I’ve gone to the running store, but I went on Friday and the lady working told me I tend to supinate and need neutral shoes. I’m hoping this is a breakthrough because I have never loved any pair of shoes I’ve worn in the past; each one has caused me problems.

Maybe, just maybe, a match made in heaven.

Has anyone had knee pain in the past and can offer up some advice? Thank you!