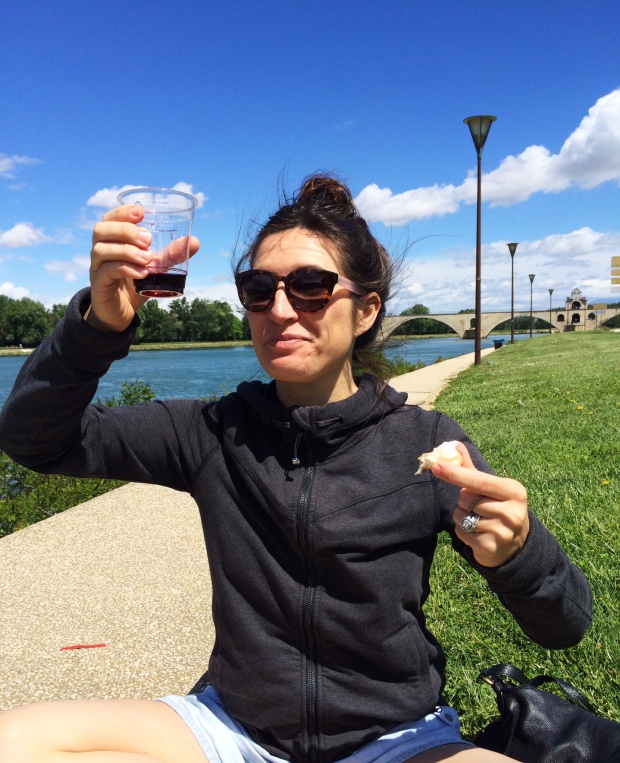 As I sit here in Avignon, France at the kitchen table in a house that dates back to the 1800s with the windows open, listening to the French TV coming from another apartment in the courtyard that has been blasting nonstop since Thursday, I realize that things can’t get much better. Today marks one month since Jeremy and I arrived in Europe, and it feels like an important milestone. I keep hearing people say, “I can’t believe it’s May already.” Well, I can’t believe it’s ONLY about to be May and that we only stepped foot in Iceland four weeks ago. We have done so much, seen so many things, and traveled so many miles that it feels like we’ve been here six months already. 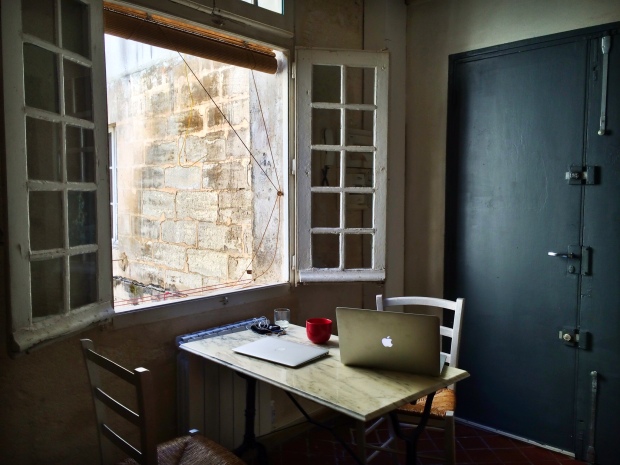 To recap the past month in numbers:

4,821 – approximate number of miles we’ve traveled (by plane or train, including flight from NYC to Iceland)

100 – approximate number of picnics we’ve had

2 – glasses of wine spilled on the train 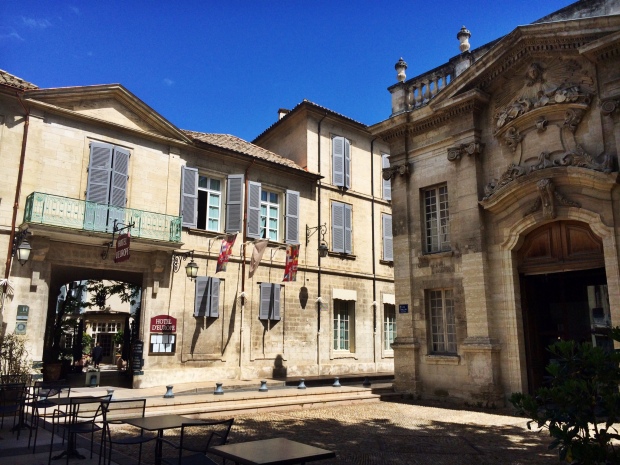 I’m sure I’ll be singing a different tune when this whole trip is over and we’re back in California reminiscing over tacos and guacamole, but right now, it feels like time is moving slowly, which is a completely different story than when we were back home. It felt like every time I blinked, a year had gone by, and I’d wonder, “What did I even do last year?” Sure, Jeremy and I had a lot of fun the past few years in Santa Barbara, had some incredible sunset beach walks, made really good friends, took some great weekend trips and a long road trip to the Pacific Northwest, spent quality time with my family including two new nephews, but all in all, it felt like we weren’t actually DOing anything, but instead just working and waiting for the weekend, which would be over before we knew it. It just felt like something was missing. I think I can put my finger on it now: adventure.

La Place des Corps-Saints in Avignon, next door to our apartment.

I realize how fortunate we are to be doing what we’re doing. We are lucky to have extremely supportive families that encouraged us and didn’t make us feel like we were making a huge mistake, I’m lucky that my parents took me traveling almost every year growing up and it’s always been an important part of my life and has made me confident that I can navigate foreign countries by myself, we’re lucky that Jeremy and I have similar interests and get along so well that we can hang out 24/7 for months on end and still have a good time every day, etc. We were also at a point in our lives where we were able to leave our jobs and start a new chapter, which I realize is not common.

[Side note: I love to read others’ stories about how they dropped everything to travel the world and how it’s totally possible for anyone to do it. Here’s a good one on a travel blog/resource site called Nomadic Matt about how a guy saved up $14,000 in six months working at a pizza place to travel for a year.]

For a trip this size, it was hard to be fully prepared for it. The couple months before leaving were filled with questions like: What should we pack? How much stuff should we bring? What kind of luggage should we get? If we’re there for different seasons, how do we pack to be prepared for the extreme temperature changes? I’m a creature of habit, and wear pretty much the same thing almost every day, even when I’m home with an entire wardrobe in front of me. I still like to have options though, and didn’t know if I would lose or gain weight, rendering some of my items useless. We learned from our packing mistakes early on, and have since downsized and changed luggage situations three times, and sent a big box of stuff back to America from England (even though it was really expensive, it was worth it). I kept repeating “pack light” in my head, but then defensively thinking, “well how am I supposed to pack light but still be prepared for glaciers in Iceland and hot beach weather a few months later?” I think we’ve come to a good compromise with luggage: I have a backpack that I put my laptop, camera bag and purse in, and a suitcase that rolls (that is unfortunately too big to be a carryon). Jeremy has a backpack and a duffle bag. Right now, it’s still been fairly cold when we travel, so we wear many layers on our bodies, which leaves room in our suitcases. Soon, though, it’s going to be hot and we’ll need to stuff our jackets in our bags, which might cause problems. Luckily, my parents will be meeting us in a few weeks, and hopefully they will have some room to take some of our winter clothing back with them. BUT, what if we’re here until winter at the end of the year? I think it’s more important to shed these items now, rather than hold onto them in the case of that happening. We can always buy cheap jackets when that time comes.

Slow Travel is the Way to Go

We’ve also learned that slow travel is best for us. We don’t feel the need to stay in a hostel in a city two nights and try to cram as much as possible into those two days, then move onto the next place. I’ve done that a couple times (minus the hostel-staying), and we’re going for quality over quantity this time around. I’m not saying we’re old, but we’re also not 18 and looking to party. It’s more cost efficient to stay somewhere for a week or a month (places on Airbnb have rates that go down the longer you stay), and it’s also just more pleasant for us. And we don’t have to be in a major city; discovering smaller cities and villages has been really fun, and even here in Avignon, I feel like we know our way around and people recognize us at the bar in the square downstairs we’ve been frequenting (this may be wishful thinking). This is another reason discovering housesitting has been so great; we never would have gone to the small village outside Geneva, the country house in Kent, and the one we’re starting on Thursday is in a really small village in the Languedoc-Roussillon region in the South of France.

How to Travel on a Tight Budget

The only way we’re going to be able to stay over here a while longer is to be very careful with money. In the past month, we have learned what to spend money on and about how much we should be spending on food and lodging, how to avoid expensive countries from now on (I’m looking at you, Switzerland), how to survive on the cheapest food you can find at the grocery store for two weeks [which will probably be pasta and bread (again, damn you Switzerland)], how to celebrate not being in Switzerland anymore by splurging on bottles of French wine for €2 as soon as you step foot in France, and how we need to spend more time places to get better rates on rental apartments. It’s also currently the off-season, so things are cheaper. As we get into June/July/August/September, things will begin to be more expensive and good deals will be harder to come by. We’ve been planning ahead to secure rentals now instead of being forced to spend a lot at the last minute due to a lack of options. Luckily we secured a month-long housesitting in August, and we won’t have to worry about finding a place during the busiest summer month. 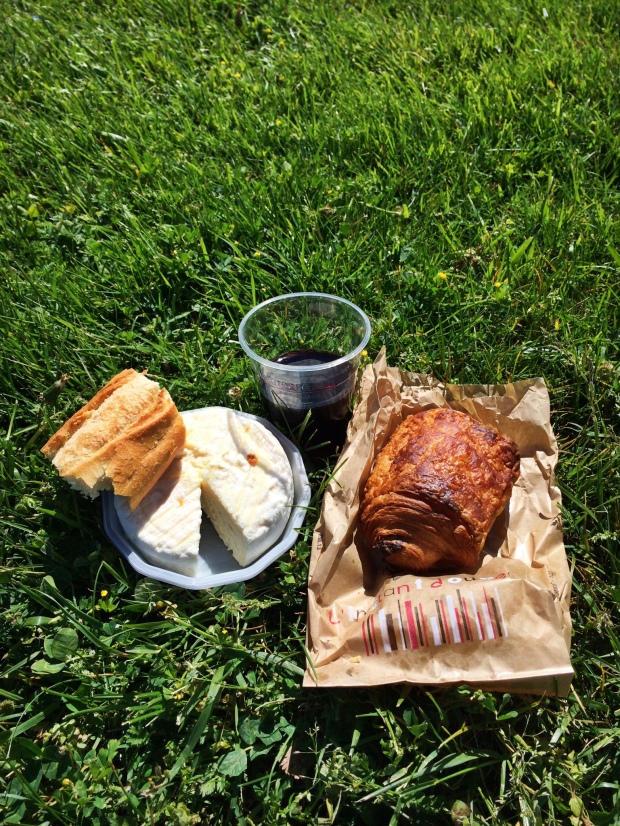 As far as food goes, it is much more cost efficient for us to go grocery shopping and cook our own meals (which is one of the main reasons we rent apartments instead of staying in hostels/hotels), and unfortunately this means foregoing eating at some delicious restaurants. Dining out wasn’t even an option in Switzerland (the “cheapest” lunch we could find was about $30 a person, and that was considered a really good deal), but here in France things are less expensive and Avignon has some delicious-looking  options. The first night we were here, we did go to to a restaurant and get pizza, but we made sure to take enough home so that it would be our dinner the next night. We’ve decided we’re going to get a nice, not too expensive dinner on a few special occasions: our birthdays and wedding anniversary. 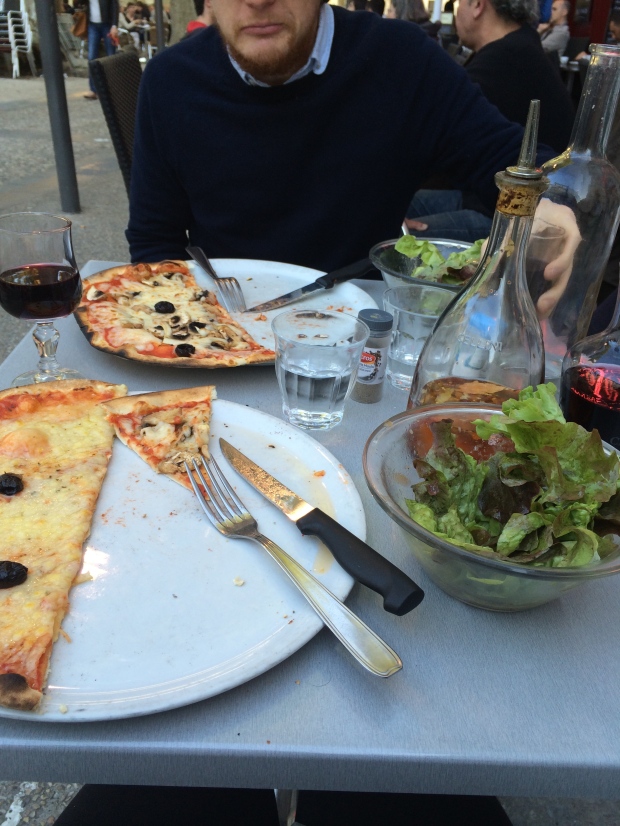 A rare dinner out.

Another important thing we have learned is to never, ever leave your errands (especially grocery shopping) for Sunday, because everything in town is closed and you will be SOL.

These are just a few of the things we’ve learned so far, and I can’t wait to find out how we feel after month two. Thanks for following along and all of your encouraging words!