After leaving Rome, Jeremy and I took a train ride to Bologna. We picked Bologna because of its central location, and from everything we read online, the food was supposed to be incredible. It did not disappoint. It’s not a huge tourist destination, which we enjoyed, especially after coming from super-crowded Rome. We have been staying a week in most destinations, because many apartments on Airbnb have weekly prices that are much better than the nightly rates. It also gives us enough time to really explore a city, and have some downtime if needed. 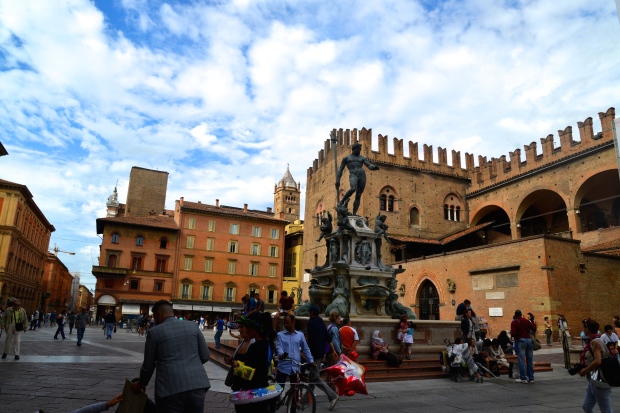 Bologna is the capital of the Emilia-Romagna region, which is home to some pretty delicious foodstuffs (Parma Ham, aka prosciutto, and Parmesan cheese from Parma, Bolognese sauce from Bologna, etc.) and great wine. Bologna is also known for its porticos which line the streets, so you’ll always be shaded from sun or rain wandering around.

One of Bologna’s nicknames is the “Red City,” and you can immediately tell why when entering the town center.

All the buildings are a shade of red.

The internet wasn’t lying about the abundance of delicious food in Bologna. I was beside myself as we were walking down the small streets of the historic center. There were meat, cheese, produce and seafood markets on every corner or more, and we bought some Parmesan cheese from a store and devoured it when we got back to our apartment. 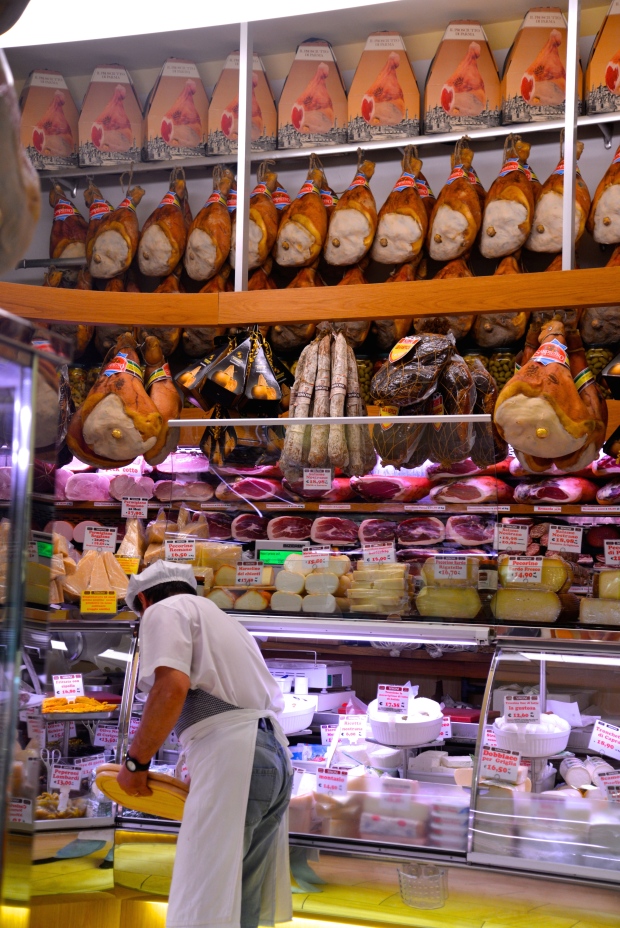 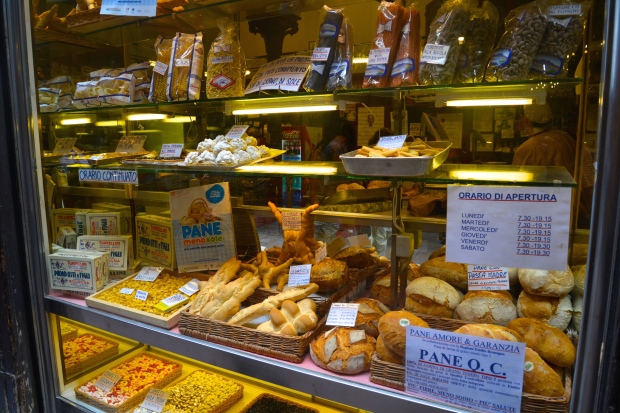 We wanted to get some authentic Bolognese sauce (it’s called ragu there), and didn’t want to spend a bunch on it. We found a place called Osteria dell’Orsa, which had daily pasta specials for 6 euros, and we ended up eating there twice. The first was for lunch, and I got the most delicious pasta I’ve ever eaten. 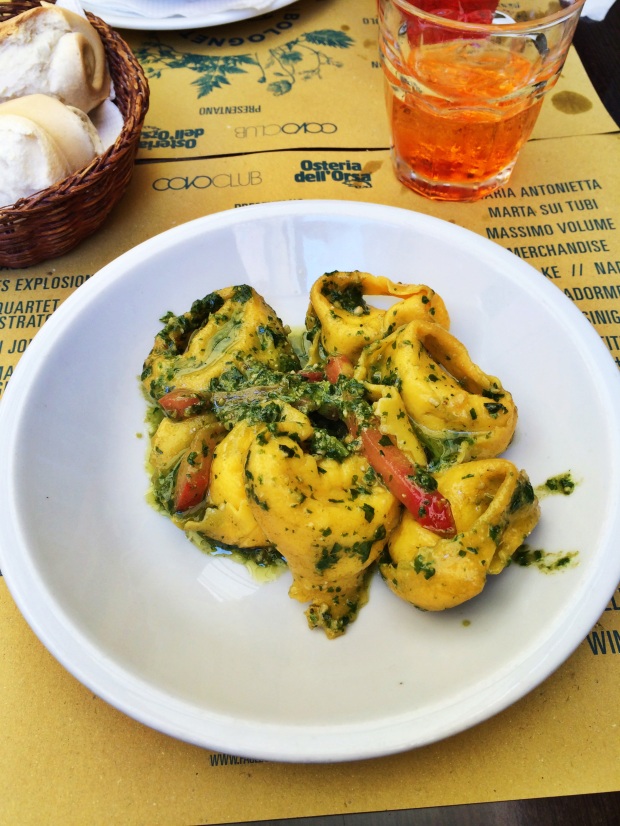 I love pesto SO MUCH and this was the best I’ve ever had.

The second time was for dinner, and Jeremy got the Bolognese sauce, and I had to get a pesto pasta again.

We also got a drink at this really cool bar.

…and drank pistachio cappuccinos at a coffee shop. Good lord they were tasty.

Speaking of food, the first night we arrived in Bologna was July 4, and we celebrated by making a meat and cheese platter while watching House of Cards… in bed (no dining table in this apartment). 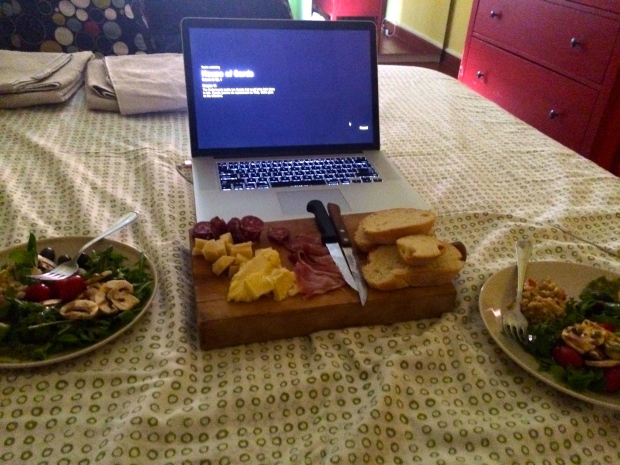 There was a huge movie screen set up in the main piazza in town, and the city would show a different movie every night for two months. The second night we were there, they played the Beatles movie A Hard Day’s Night, and Richard Lester, the director, was there to introduce it. We didn’t even know he was going to be there, and it was really cool. There were thousands of people there to watch, with people dancing along to the music.

Earlier in the day, before the crowds came. 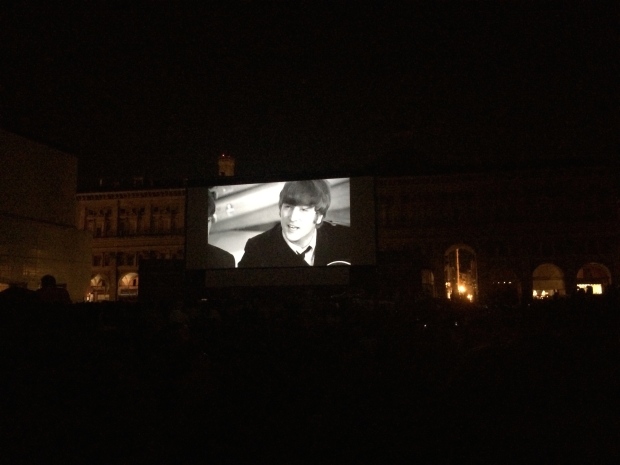 They were playing Annie Hall a few nights later, and we were determined to go (it’s one of our favorite movies). It started pouring about ten minutes before the movie was supposed to start, so it was moved to a movie house across town. We ran across the piazza and jumped in a cab, and luckily made it to the theater before it began. The movie was actually cut in really weird places, sometimes cutting out whole conversations, but I guess it still made sense in the Italian subtitles.

There are two towers in Bologna, both leaning slightly (the Asinelli Tower is actually taller than the tower in Pisa, and is the tallest in Italy). The towers were built in the 12th century, and it’s about 500 steps to get to the top of Asinelli. Once again, my fear of heights reared its head and I was convinced the tower would fall over while we were at the top (because that makes a lot of sense), but we still managed to admire the view for a bit. 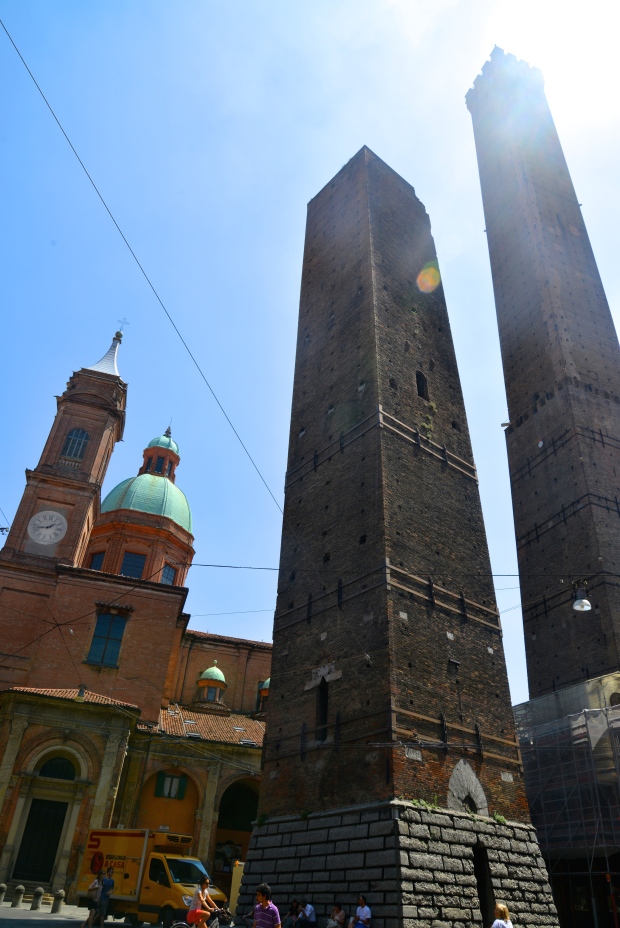 The leaning towers of Bologna – we climbed the one on the right.

The very narrow entrance to the tower. 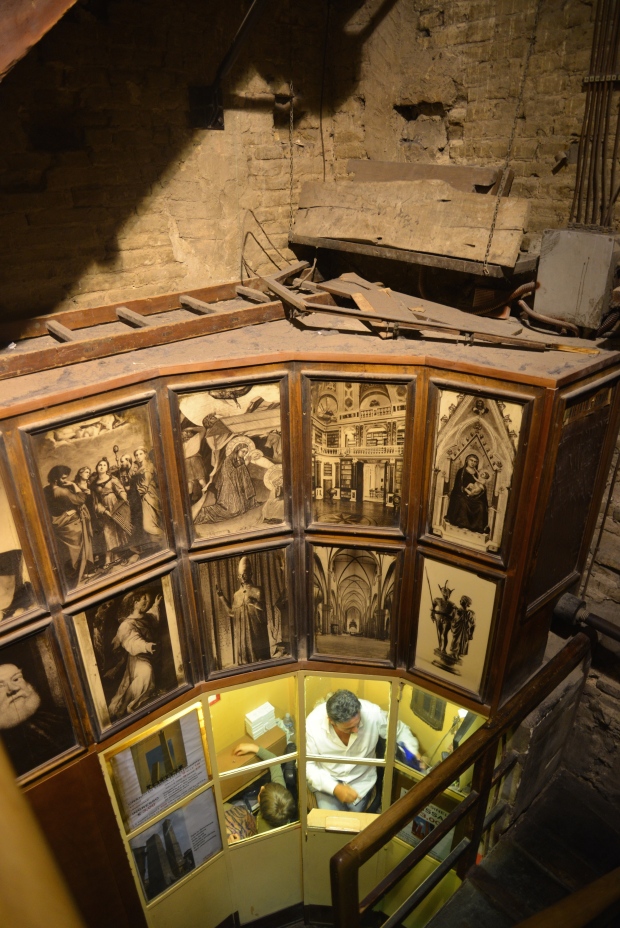 Starting the climb – you buy your tickets from the man down there.

View from the top. 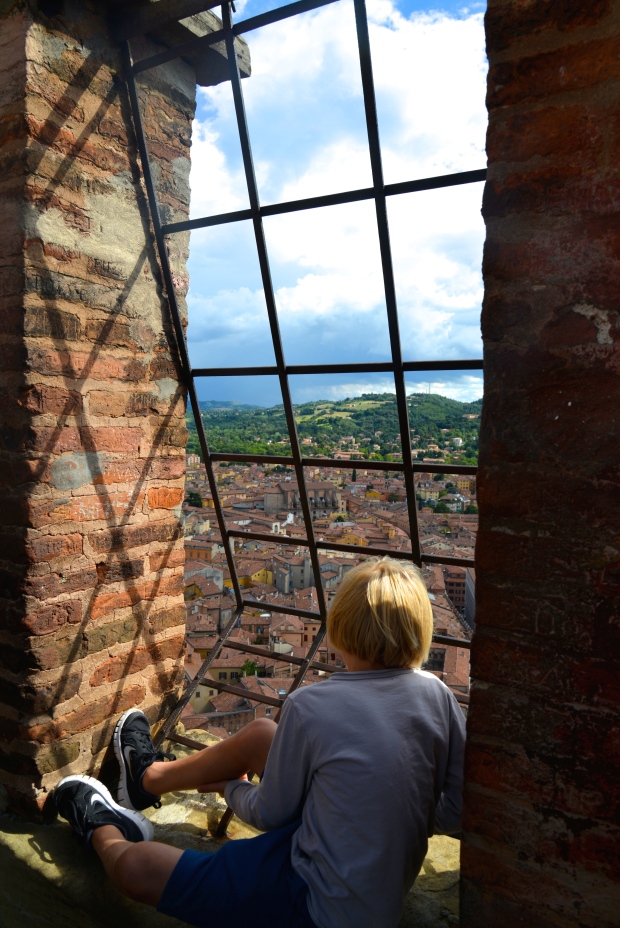 We really liked Bologna, and it was a great place to spend a week. It was also pretty close to Venice, which we visited one day. I am still dreaming about all the food in Italy in general, it was all such a treat.