The past few weeks (we’ve already been in Paris THREE WEEKS, how is that possible?!) have been pretty great, minus the week I spent in bed sick. I’m finally feeling healthy again aside from some residual stuffiness – it’s been the longest cold ever – and our days have been filled with exploring the city, eating delicious food, a visit from Nicole, and running.

Nicole had only been to Paris once before and it was in high school, so I wanted to make sure we walked around a lot and saw a good amount of sights. I love the size of Paris; it’s a big city but totally walkable. And you can always hop on the super-efficient Metro if needed. Many stores/restaurants are closed in August since it’s when most Parisians go on vacation and the city is filled with tourists, but it is still great (obviously). 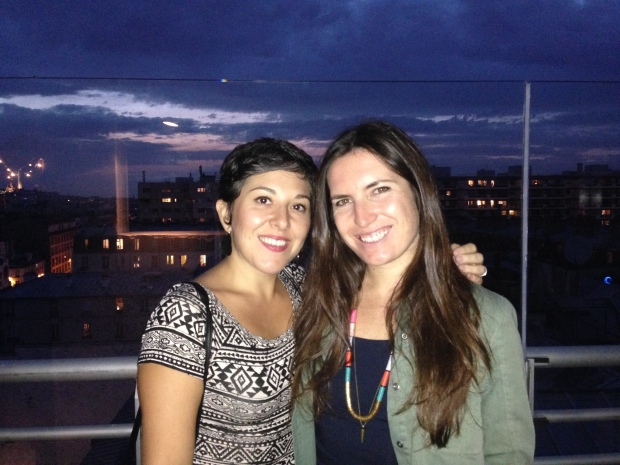 Jeremy and I took Nicole to Le Perchoir for her first night, a rooftop bar overlooking the city. 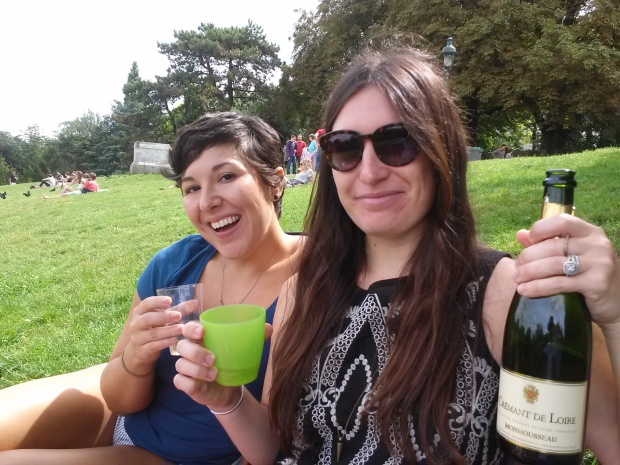 Finally celebrating my birthday with a champagne picnic. 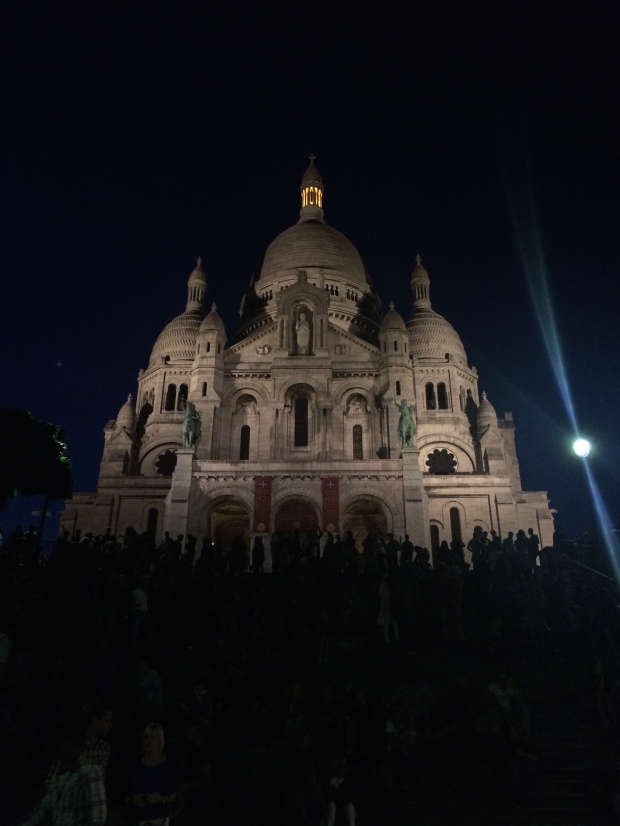 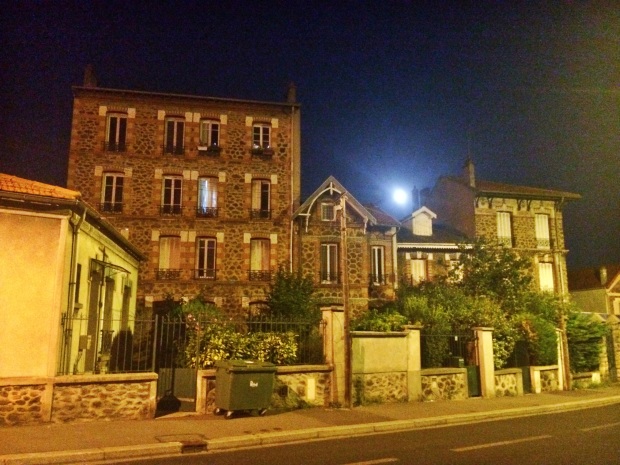 Supermoon in our hood. 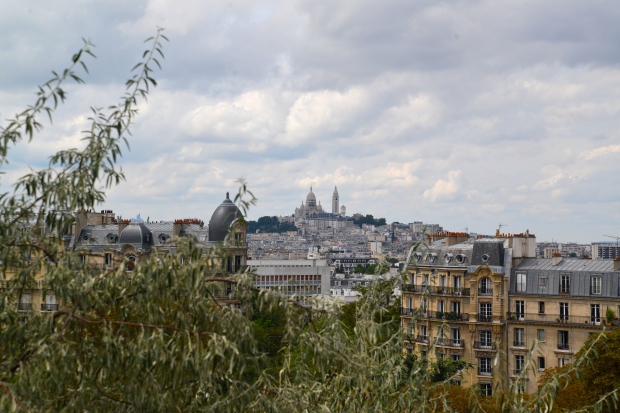 Sacre Coeur from a distance.

Right before it started raining at Jardin du Luxembourg. 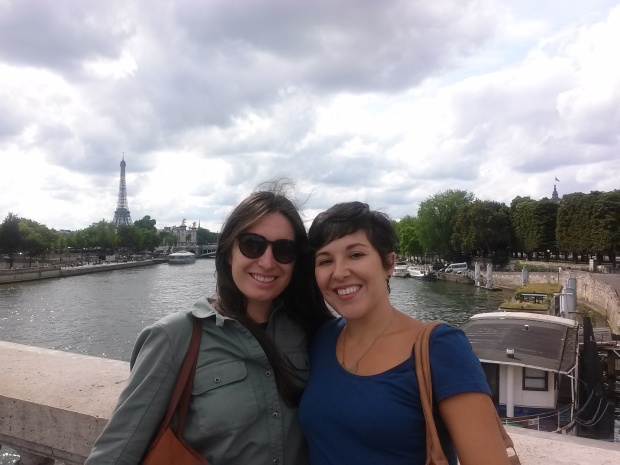 Drinking wine on the Canal Saint-Martin, one of my favorite things to do here. 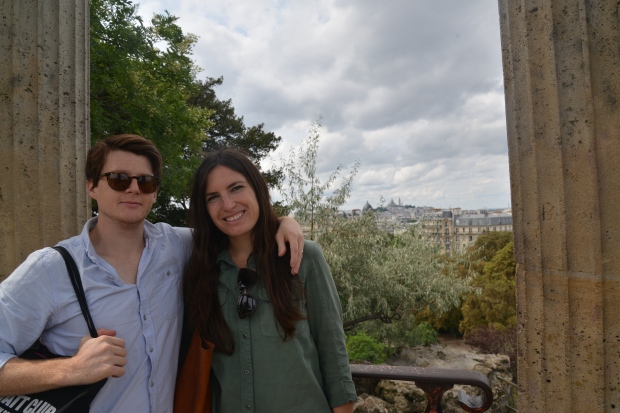 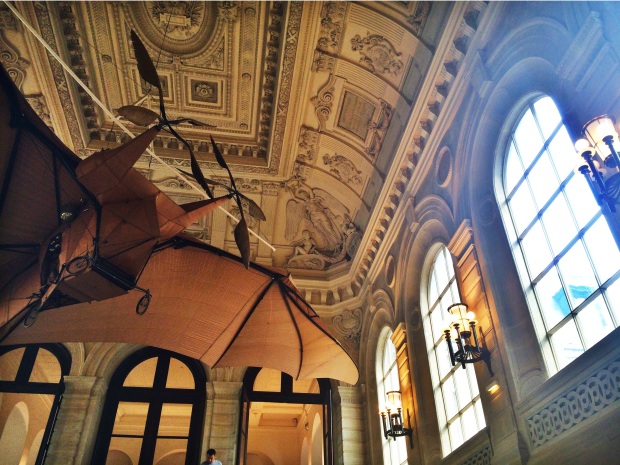 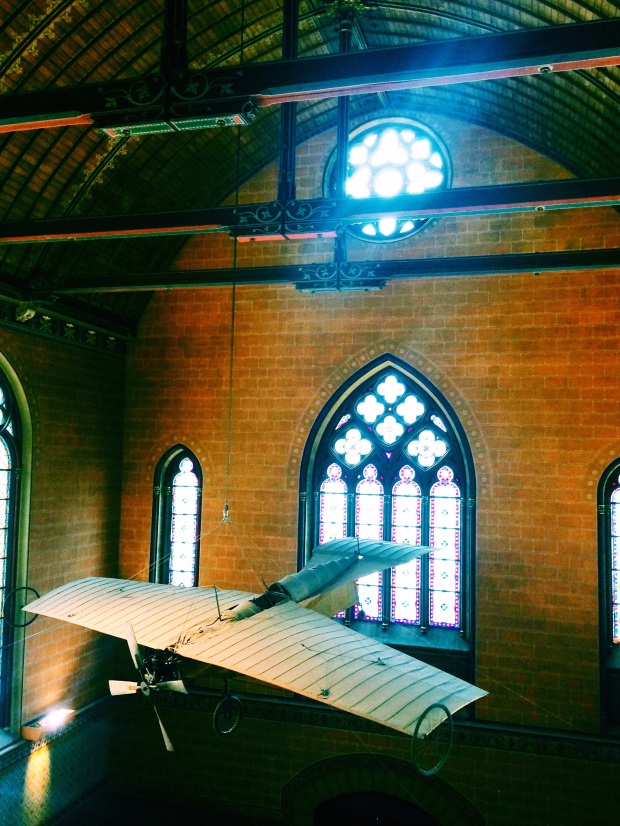 Jeremy and I spent the first couple weeks here resetting our bodies, since we were feeling sluggish and puffy after eating unhealthy (albeit delicious) food and alcohol the past few weeks/months. It helped a lot abstaining from alcohol, dairy, and sweets. When Nicole got here, I was ready to indulge in the deliciousness that Paris has to offer, and it did not disappoint. 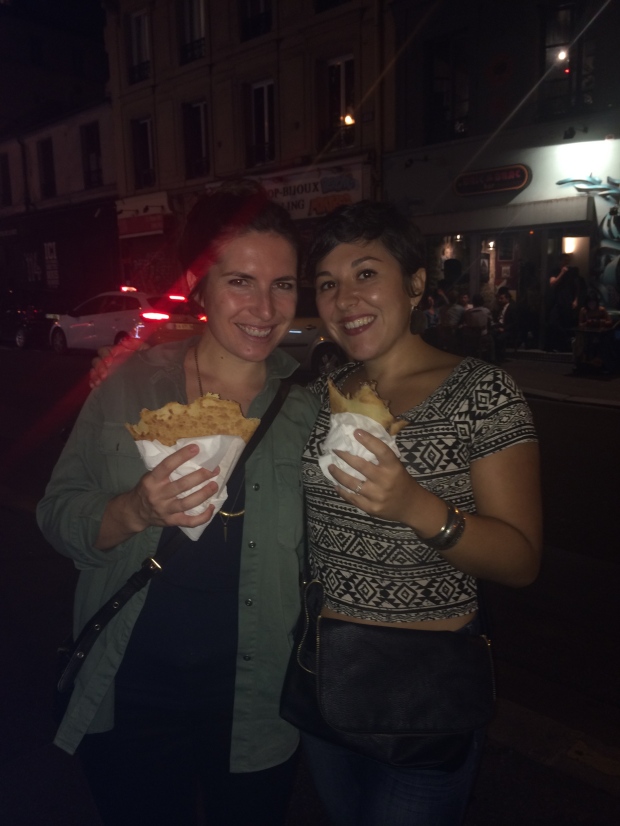 No trip to Paris is complete without late night crepes. 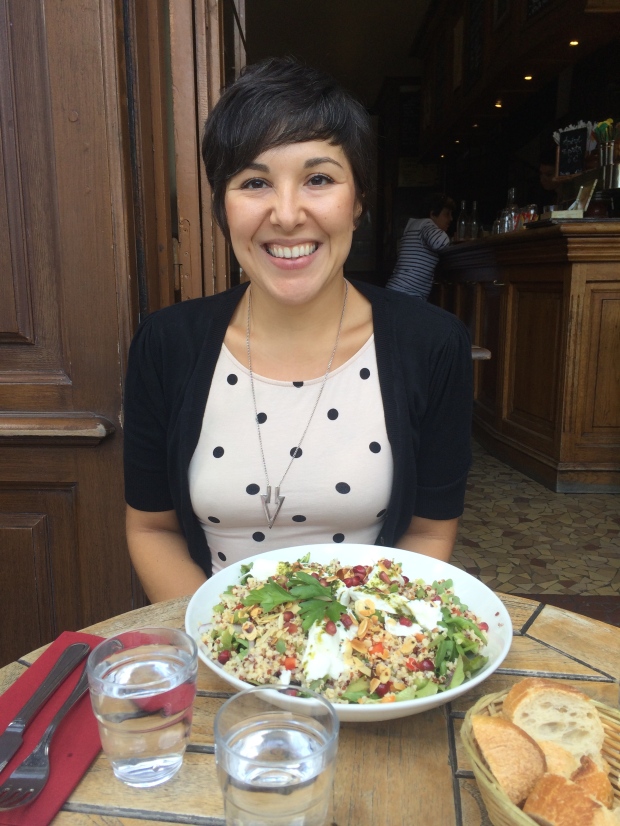 Close up of that incredible salad. 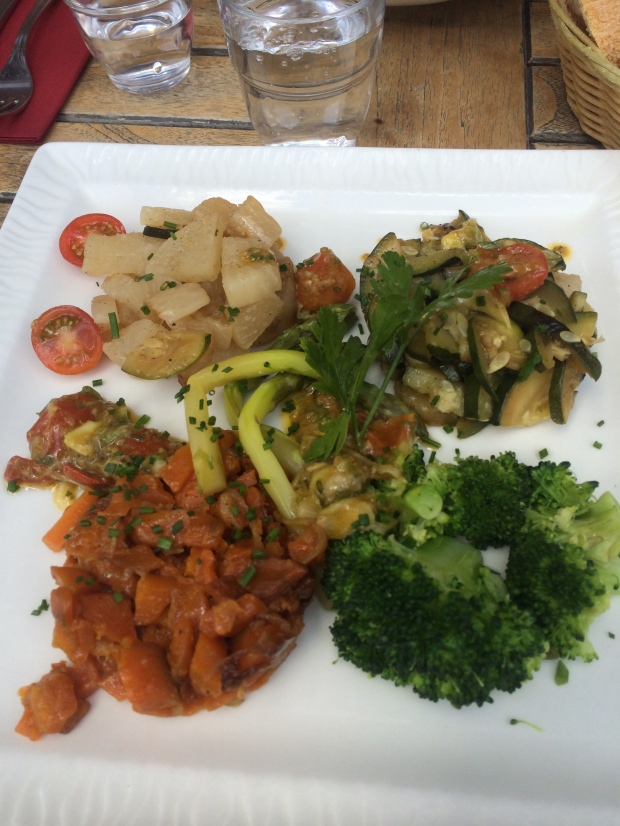 We ate this falafel hours after Nicole arrived.

Nicole and I had a lady date at Ladurée complete with tea and macarons. 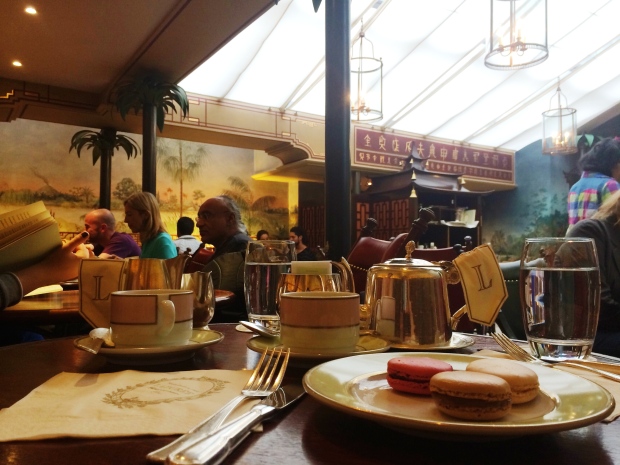 The interior of Ladurée. 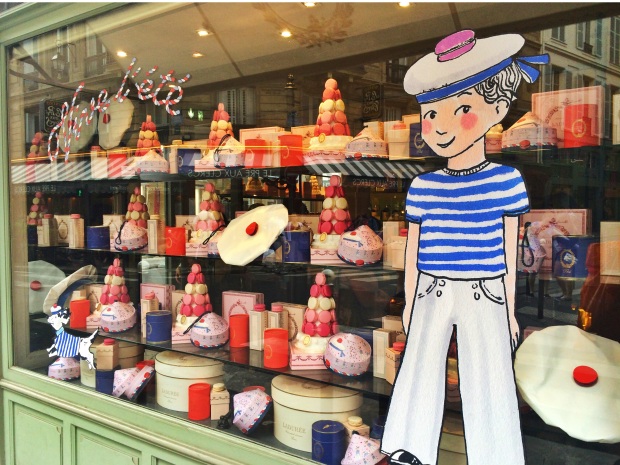 I want a macaron hat.

I feel like I’ve made some progress lately, and I’ve had some nice runs the past week or so. Nicole and I went running a couple times, which was fun since I haven’t run with anyone in ages, and I got in nine great miles on Monday. I feel better knowing that maybe I won’t suffer too much during the Dingle Half in three weeks (!!!). 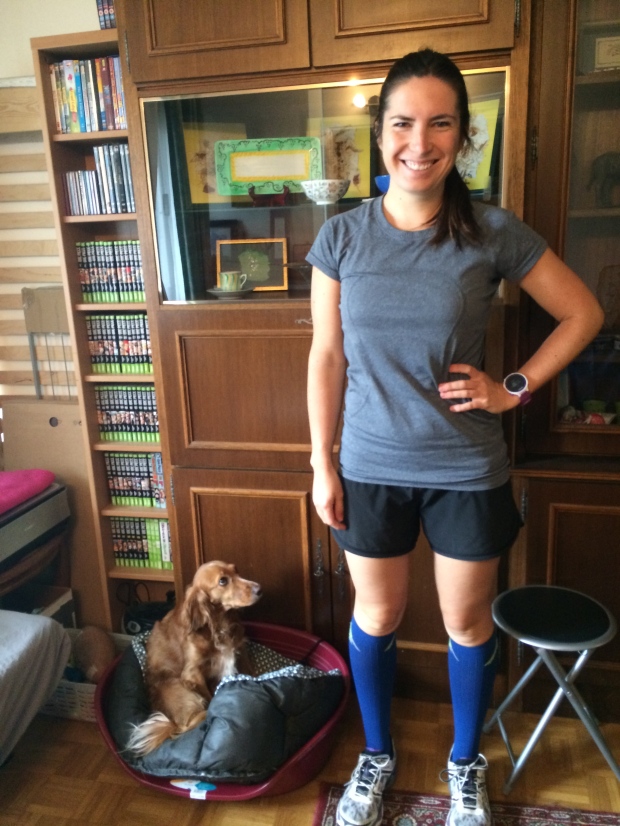 Me and Frimeuse the dog.

This one felt good. 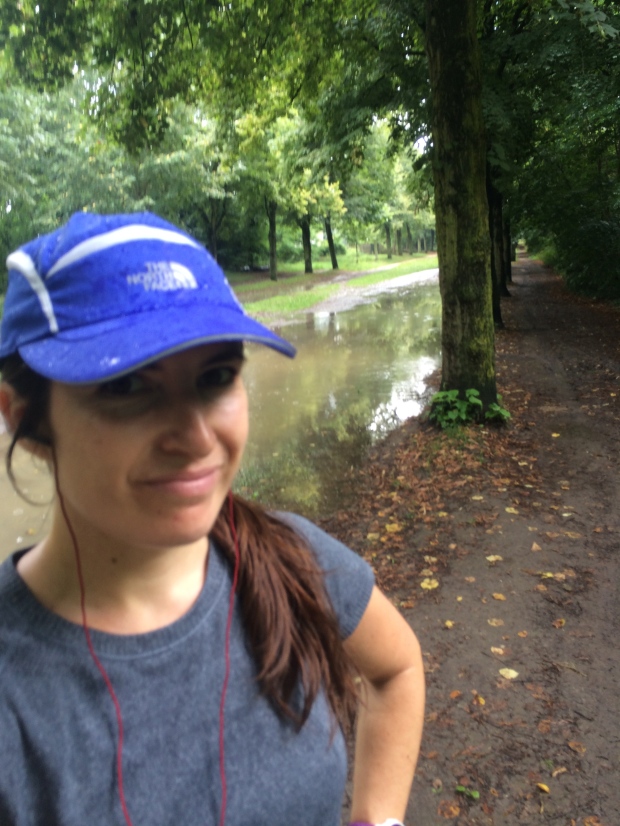 It’s been raining a lot lately, but it’s been perfect running weather. 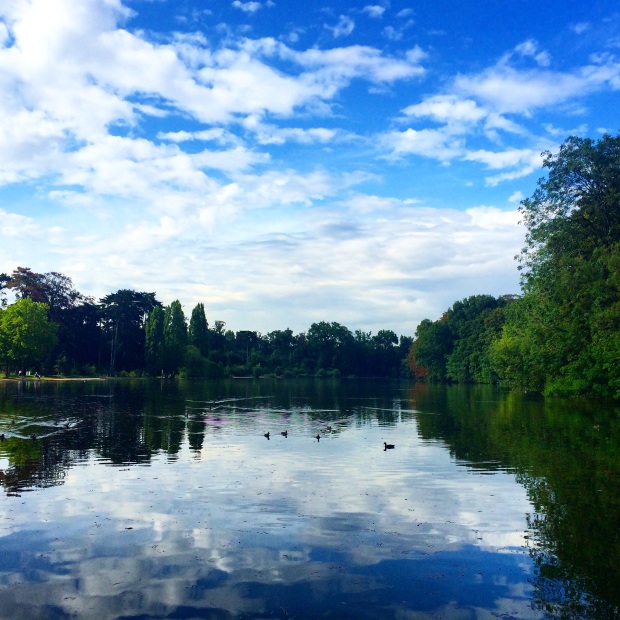 Seen on my run.

My training has been all over the place and I’m not really following a plan, so we’ll see how it goes at the race in a few weeks. I am planning on joining a running group tomorrow morning for a 15k run, which I’m a little nervous about since I don’t know anyone and I’m shy in these types of situations, but I really want to do it. Hopefully I won’t lose my nerve!