This was my second year running the Santa Barbara Veterans Day Half Marathon. It’s my hometown race, so I’ll likely try to run it every year I’m able. Last year when I wrote my recap, I had just started blogging and it was my second half marathon ever. I ended up expending all my energy right before the biggest hill of the course at mile 10 or so. I crashed while running up the hill (I didn’t allow myself to stop, but people were walking past me faster than I was shuffling), and the last few miles were painful. I also didn’t realize we had to run a lap around the track at Santa Barbara City College right at the end, and that hurt too. This year, I was hyper-aware of saving energy for the hill, and it paid off. I was also treating this race as just a long run, since I didn’t feel super prepared. But, let me start at the expo.

Shake-out run on the beach two days before the race. 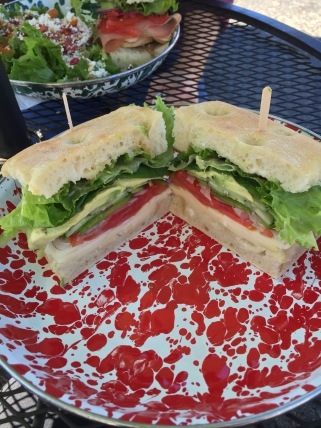 I have gotten this exact sandwich for lunch the day before two half marathons and they both went well, I think I should stick with it.

Santa Barbara sure is pretty.

Like I’ve said before, I don’t care too much about expos. I enjoy them I guess, but it doesn’t matter to me if they are big or small; I usually just walk around a bit and get my number and shirt and leave. I hate to say anything negative, but I haven’t had the best luck with volunteers at the SB Expo. Last year was not quite as bad, but this year the lady handing out the shirts was pretty rude. The shirts are a baby blue, and made of non-tech material. I ordered a women’s medium, and there is no way I can squeeze into it. Last year the shirts ran a size small also, but they were aware of it and gave everyone a size up. This year I asked the lady to switch out my shirt and she basically just coldly said “No.” I’m sure she had a lot of people asking her the same question and maybe that’s why she was short with me, but I don’t think it would have hurt to smile or something. Anyway, a lot of people have been complaining on the race Facebook page about the shirts, so hopefully they’ll get some different ones next year. People were also upset because the medals were held up in a port in Long Beach and didn’t arrive on time, so they’ll be sent out in the mail at some point. I can’t even begin to imagine how much work goes into putting on a race, so I’m not about to go say something nasty on the Facebook page, but these were just a couple unfortunate things.

At the expo, I ended up buying a new handheld water bottle (I grew to hate my other one) and some Body Glide from the SB Running Store stand. I bought the Nathan SpeedDraw Plus for $25 and even though it seemed a little pricey, I’m really glad I got it. I used it during the race for the first time, and it was so much more comfortable to carry than my other one (the Nathan QuickDraw Plus). I also picked up a sample of lemon-lime Clif Shot Hydration Drink Mix and put it in my bottle to drink during the race. I don’t know why, but I always try new stuff during half marathons and luckily it’s always worked out for me. I will not do this during my first marathon, don’t worry.

That evening, I met my friend Liz on the beach and we drank a beer and watched the sunset (at like 4:30pm). We then met Jeremy for a drink… I wasn’t planning on drinking any alcohol the night before the race especially since I hadn’t been sleeping well and was exhausted, but hey it worked out.

My mom made fish and sweet potatoes and green beans for dinner, and then I went to bed early.

I didn’t sleep at all really, maybe a couple hours, and the 5am alarm was rough. I had a small bowl of oatmeal with half a banana and a cup of coffee, and Jeremy and I left my parents’ house at 6:30am so he could drop me off at the start. It’s a good thing we didn’t leave any later because they closed off the roads about five cars behind us. The race started at 7:15am and I arrived at about 6:55am. I used a porta-potty (there were no lines at the ones near where Jeremy dropped me off, but long lines at ones closer to the start), and headed to the starting line.

There were waves but the chutes were so small that nobody could really squeeze in, so I just found a place near the back and waited. The weather was pretty warm and I didn’t need a sweatshirt or anything. I usually don’t bring my phone during races, but I wanted to listen to a podcast for the first half at least, so I stuffed it in the pocket of my handheld water bottle. 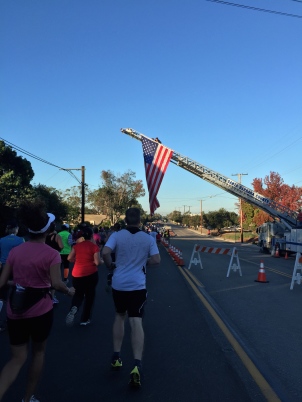 The only picture I took during the race.

I’m not good at remembering specific miles, but I do know that I drank a good-sized cup of water at each aid station because of the heat, and I drank about half of my electrolyte drink I was carrying. I ate half a Clif Shot mocha gel at about mile 8 and threw the rest away (I don’t think I’ve ever been able to eat a whole one). I listened to the Serial podcast for the first nine miles or so, and that made it go by pretty fast. I didn’t feel too tired and I kept a steady pace. All the volunteers handing out water and Gatorade were really nice and that part of it seemed a lot more organized than last year. During the last mile before the big hill, I put my music on and tried really hard to start building up energy. I was following a girl (not too closely) that was dancing and singing along to her headphone music, which helped. As soon as the hill started, Eminem’s “Survival” came on and it was the absolute perfect song to hear at that moment. The lyrics, as cheesy as they are, helped me so much and I felt really strong and started passing people left and right.

I’m embarrassed these lyrics affected me so much, but I’ll take motivation where I can get it!

I ended up walking for about 15 seconds to catch my breath near the top (the hill is loooong) but then I knew the last two and a half miles or so were basically downhill to the finish. I pushed those last few miles, and got a nice burst of energy when I saw Jeremy near the finish line. The finish was so much better than last year; spectators could line the course and we didn’t have to run a lap on the track. Official finish time: 2:09:36. I didn’t have a specific time goal for this race, but I was hoping to finish under 2:10. Last year my time was 2:04:22 so I haven’t lost too much fitness thankfully.

After the race, I went to put my feet in the ocean and asked a lady to take a picture of me. I ended up getting hit by a wave right as she was taking it. Whoops. The water was pretty cold and it felt SO GOOD. 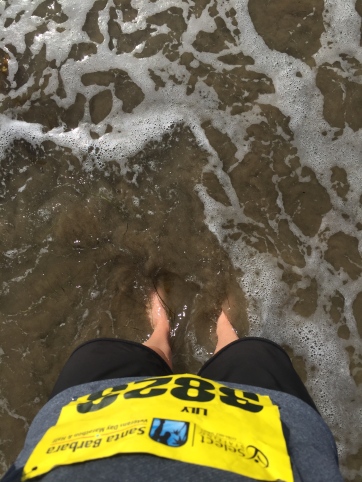 Pretty much the only thing I can stomach after a race is something salty, so I found some fries from Georgia’s Smokehouse food truck immediately. 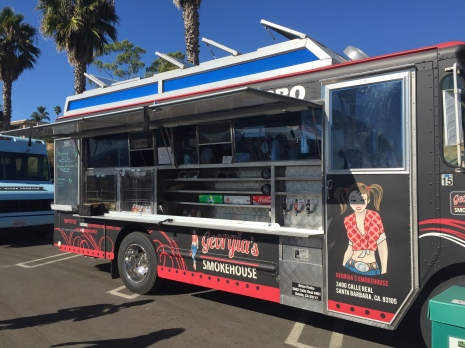 McConnell’s has the best ice cream ever, I’m sad I didn’t feel like eating any.

Jeremy and I drove back to LA that afternoon, and I celebrated my race by eating chips and salsa and wine. I used The Stick to roll out my muscles and iced my knees.

And then we got breakfast burritos the next morning from this cute little place in Atwater Village that we heard about from an Anthony Bourdain episode. 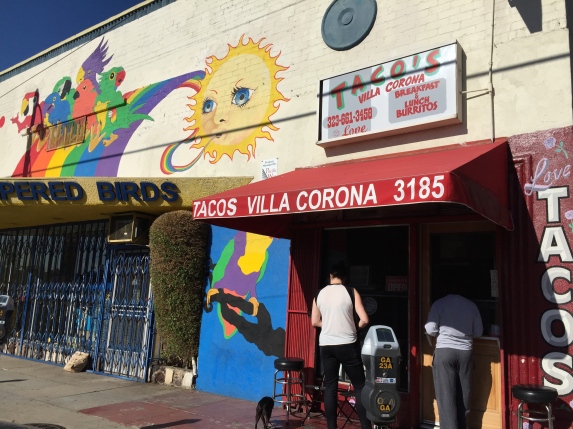 The next half marathon I’m registered for is the San Diego Half on March 8th, which will be my third year running it. Will I finally break two hours there?! I sure hope so. In the meantime, I’m going to focus on building a strong base to start marathon training in January, and losing the weight I gained in Europe (oops). Hopefully the SB Half medal comes in the mail soon!