Christmas has come and gone and nobody is even thinking about it anymore, but I had some good workouts last week that I wanted to share, so everyone’s just going to have to deal. Christmas Eve morning was spent at November Project at the Hollywood Bowl, and I wore my special naughty santa Christmas sweatshirt (that I didn’t take off for the next couple days, apparently).

This workout was SO fun because it was a scavenger hunt and we had to run around the Bowl finding letters and completing the exercises listed before moving onto the next, and finally trying to figure out what the letters spelled out. Many of the exercises included singing Christmas carols while doing burpees. It was also fun because I met fellow blogger Kaitlin over at California Endless Summer. I think this was my first real-life blogging meet-up! She’s a native Southern Californian but now lives in NYC and was visiting family over the holidays.

I stole this picture from Kaitlin.

After November Project, I had to work at home for a few hours, but then we headed up to Santa Barbara to spend Christmas with my family.

On Christmas, we opened presents with my family and then ate the feast my mom cooked and Jeremy, my dad, and I headed down to the beach to watch the sunset, per tradition. It was SO cold and windy (the coldest Christmas in memory).

My medal from the Santa Barbara Half Marathon I ran at the beginning of November finally arrived in the mail (there were delays and didn’t hand them out at the race), so that was exciting. 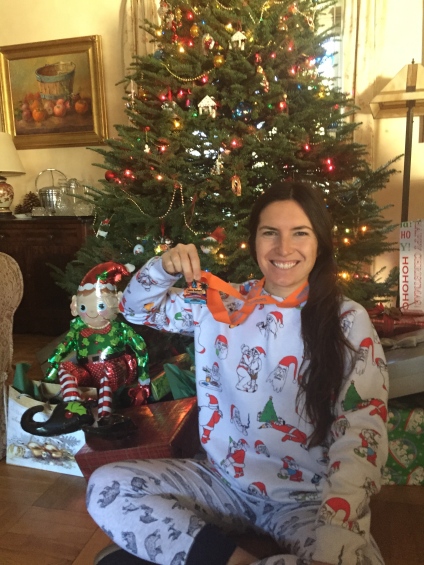 Jeremy got me this awesome Nike tank that has the Santa Barbara Running Company logo on it, and I can’t wait to wear it when it warms up. 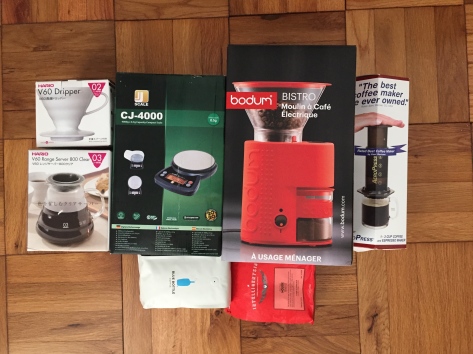 We have been drinking some incredible coffee ever since Christmas… 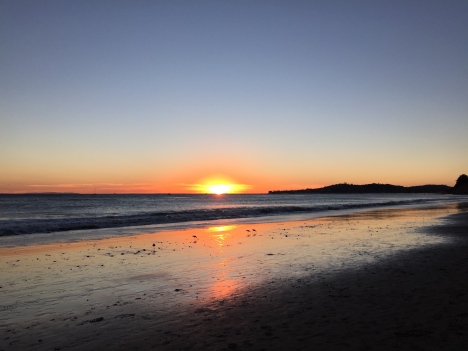 The day after Christmas, I drove to More Mesa Bluffs to get a run in. I don’t know why I didn’t go here more to run when I lived in Santa Barbara. There were barely any people and I had the trails to myself pretty much (except for a run-in with a couple horses that forced me to run along the edge of the cliff and I was convinced I was going to fall to my death). I completed 4.11 miles @ 9:23 min/mile. 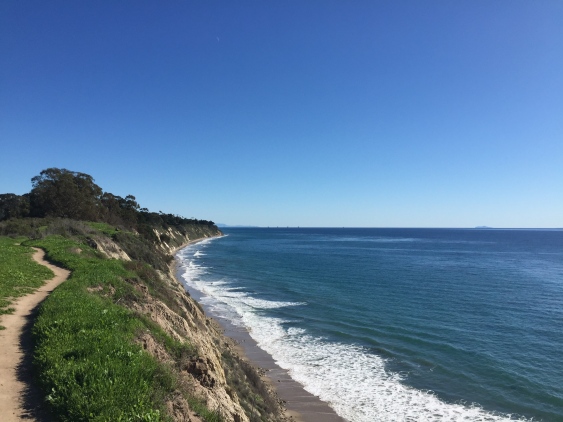 The next day, I ran 3.4 miles @ 9:05 min/mile along beach paths near Santa Barbara City College, where I did stadium stairs after. My mom was walking on the track and took some pictures while I was huffing and puffing up and down the stairs. 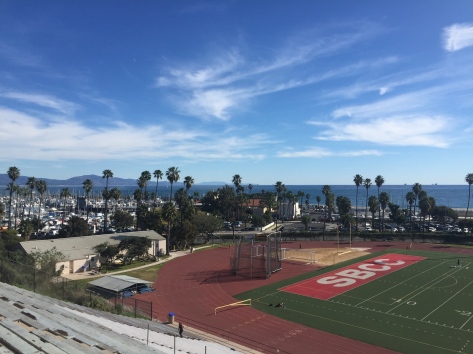 View from the top of the stairs. 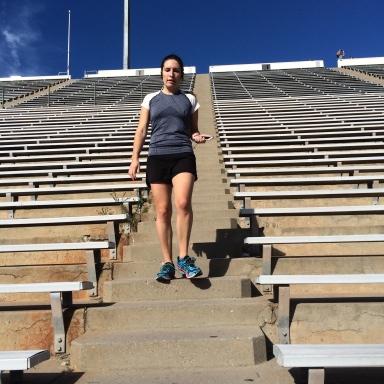 Side note: My Garmin has been acting up and not working properly so I wanted to do a factory reset to try to get it working again. I watched a video online and it said if I did a ‘soft reset’ it wouldn’t erase my data, so I did that. Well it DID erase all my data and I lost the workouts I hadn’t recorded yet. Good thing I was also using MapMyRun at the time and could manually enter them. But still, it was a little heartbreaking.

Anyway, I got back to Los Angeles Sunday and didn’t exercise since I was starting my marathon training plan the day after. So as of Monday, December 29th, I am officially training for my first marathon! I did 5 miles Monday morning. 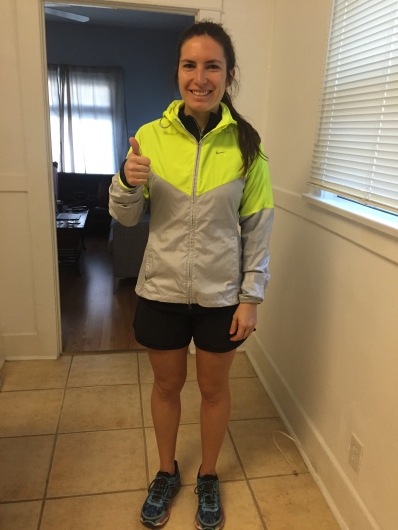 First day of training! It was 41 degrees and I was wearing three layers on top.

My marathon (the Mountains 2 Beach Marathon) isn’t until May 24th so I’ve got a good amount of time to build up my distance, and my coach Lauren of The Foodie Runner has created a plan for me and I’m so excited to complete it. I want to do weekly recaps on Sundays of my training; I think it’ll be fun to be able to look back on the entire process.

On New Year’s Eve, I went to November Project in the morning and we did 35 minutes of stadiums stairs, and I ran two miles after. It is so cold in LA right now, and I’m pretty sure it’s cold enough to warrant wearing big winter coats and not being made fun of by the rest of the country. I am so spoiled; I don’t know how you guys live in places with real winters that last for months. It’s been in the 30s when I wake up and the wind was blowing so hard during the NP workout. I DO love wearing my cold weather running gear though, I think it looks so much cooler than tank tops and shorts.

It’s supposed to warm up to the 70s again next week, so normalcy will resume.

The rest of New Year’s Eve was spent enjoying this cheese plate Jeremy made, some sparkling wine, walking to a restaurant in our neighborhood for oysters, and going out with my friend that lives in London now. I made sure not to drink too much so I would feel good for my run the next day, but unfortunately I went to bed really late which always results in horrible sleep. I think I got maybe 2-3 hours. I still did five miles the next day with two fast miles at the end, and I think if I had been fully rested I would have reached my goal paces of 8:30-8:45.

The rest of the day was spent eating… I had chilaquiles for brunch and the most delicious tacos from a place called Guisados for dinner.

Hope everyone had an excellent first day of 2015!