January was the first month I’ve run 100 miles! Before January, my highest mileage month was August of last year, when Jeremy and I were in Paris and I joined the Let’s Run Paris group and I ran about 77 miles total. Anyway, I feel really good about the past month and super excited that I hit 100 miles. I can’t wait to see where I’m at later in the year. Four months to go until the big 26.2!

Monday – 5 miles easy with 100m strides at the end

Average pace for this run was 9:29, and I finally felt like I got some mojo back after the tough week before.

The last Wednesday of the month is always PR day at November Project. We do the same amount of stadium stairs each time, and see if our times improve. The Hollywood Bowl is being worked on though, so a lot of the stairs are inaccessible. Because of this, I haven’t actually been able to compare times lately since we have to change it up. But for this workout we averaged about 2 miles of stadium stair sprints. We wore backwards hats to honor the memory of San Francisco November Project member Sam Dweck, who died in a kayaking accident the weekend before. 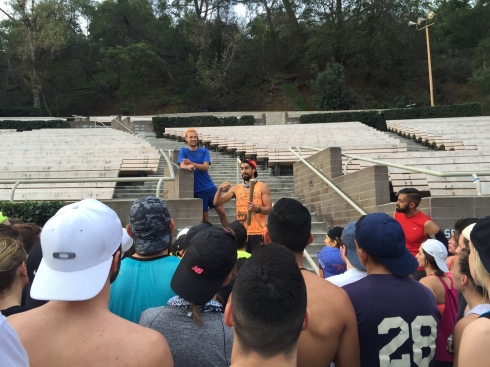 I also upgraded my ice game from frozen veggies to a Pro-Tec Hot Cold Therapy wrap for my knee that I ordered on Amazon. Now I can walk around while icing my knee, and don’t have to deal with the veggie bag leaking water all over the place.

I really like Pro-Tec stuff – I use this compression band on my knee on every run now.

I didn’t have time to do three miles after NP on Wednesday, so I made it up Friday, by doing three miles of running up and down an extremely steep sand/dirt hill at Griffith Park. It was tough.

We had to say goodbye to one of our leaders, Angelo (the guy we’re pointing at), who moved to San Diego over the weekend.

I had to complete my November Project homework by running in a place that you’re not really supposed to run, so I sprinted in the rain on the roof of my work building. People that could see out the window thought I was crazy.

The sunset was so cool after the rain stopped.

I took it extra easy on this long run, and just tried to get into a good, slow pace. It took a few miles to get into it since I was tired from the week, but I finally started feeling good and the last mile was my fastest. Ended up with a 10:19 average pace.

I had to go to work after my run, but as soon as I was done I met Molly from Also Ran Again in Santa Monica! We shared a gigantic pretzel at a place by the beach. It was so awesome to spend some time with her and finally meet in person after following her blog for a long time now. We had such a great time, and everyone needs to go visit her in Tacoma. Oh and later that night she took a selfie with Amy Poehler and they’re basically best friends now, which kind of makes me best friends with Amy Poehler too (pretty sure that’s how it works).

My legs felt super heavy for this run, which I expected. I usually take two rest days in a week, but didn’t this time and felt the effects. I’m proud of myself for working so hard all week, though.

Later in the day, my parents came into town and we went to lunch at Ledlow downtown, a restaurant Jeremy and I had been wanting to try. I got a mac and cheese croque with a fried egg on top, with a house-made chocolate root beer on the side. We all shared warm pumpkin bread with pistachio butter, and potatoes cooked in duck fat. It was all delicious.

Then we walked around the Grand Central Market a bit, then went to Salt & Straw for dessert, maybe my favorite place ever. 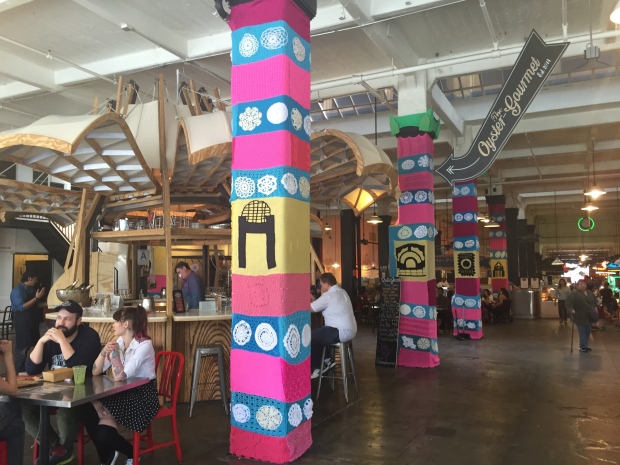